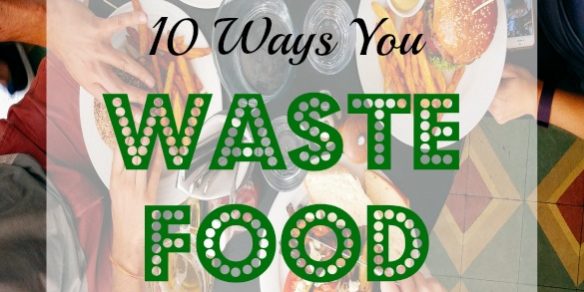 When people are trying to save money on their groceries, they usually focus on how they can get food for less money. This isn’t necessarily the only aspect that most people should focus on. There is a good chance that one area where you are wasting money is a tenancy to waste food. Here are 10 common ways that people waste food (and thus waste money): 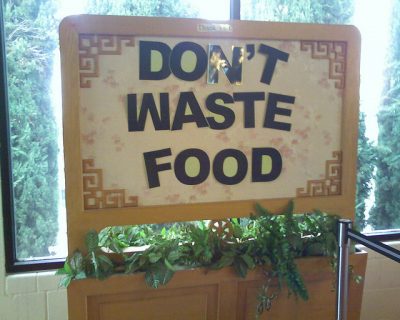 Have you ever eaten only half your dinner and then put the rest in the fridge for later? Or maybe you made enough meals to last you for a week but halfway through you decided you were sick of eating that same dish day after day. You could have also made too much of a side dish and stuck it in the fridge assuming you’d use it for the next meal. In most cases, these leftovers get tossed out. While leftovers are a good idea in theory, a lot of people end up tossing them into the trash instead of actually consuming them.

Sometimes it can be easy to overbuy when you’re at the supermarket. You may buy half a dozen apples thinking you’ll eat them, but they end up sitting in your fridge for weeks. Or you might end up buying 4 jars of pasta sauce because they’re on sale only to have them sit in the back of your cupboards until they expire. A lot of people tend to be swayed by grocery deals or the need to stock up their pantry that they end up buying more food than they’ll actually consume. Unfortunately, most of this food ends up spoiling and being thrown out.

While fresh fruits and vegetables are a great thing to add to your grocery list, they tend to spoil easily. Some vegetables last for only a day or two after you buy it and some fruit spoils pretty quickly if not consumed within a couple of days. More often than not, some people find themselves buying heaps of fresh produce only to have it spoil before they can eat it all.

However, plenty of people also waste food by throwing out produce that may be slightly overripe or have a few brown spots. Instead of tossing this produce in the trash or compost, consider using it in another way, such as a smoothie or baked good. Bananas that are beginning to brown can be used to make banana bread, for instance. There’s no need to waste slightly defective food when you can repurpose it.

Making Too Much Food

Of course, another way people waste food is by making too much of it. Have you ever made a huge dish and then had no idea how you were going to finish it? Maybe you made food for a party but then realized that there was so much food already. Half that food ends up in the trash by the end of the night since sometimes it seems easier to just toss it aside instead of wrapping it up and saving it for later.

A lot of us have gone to the supermarket and ended up buying something that we thought looked good at the time only to have it sit in the cupboard or the fridge for months. Maybe you bought a bunch of new items because you wanted to try eating healthier except you don’t actually find them appetizing. Buying food you know you won’t eat is one of the most common forms of food waste.

Not Taking Leftovers Home from Restaurants

So many people go out to eat and then refuse to take home leftovers, sometimes sending almost a full plate of food back to the kitchen to be thrown away. If you have a significant portion of your meal leftover, ask for a box so you can take it home. Wasting food at a restaurant is just as bad as wasting it at home, especially since restaurant portions are sometimes large enough to feed you for another meal or two.

Forgetting What You Already Own

Have you ever gone to the store and bought a gallon of milk only to get home and realize you already had milk in the fridge? A lot of people end up buying items they already own because they forget what’s in their kitchen cupboards. While this may be fine if you’re buying duplicates of dry goods, it tends to lead to increased food waste if you’re buying food that will spoil or expire before you can consume it.

Another big problem reason behind food waste is inappropriate food storage. There are some types of produce that spoil quickly if left on the counter or in the fridge just as there are certain types of meats that need to be cooked or frozen within a day or two. Not following the proper storage techniques can often lead to food spoilage.

One of the biggest problems with the food waste epidemic in most first world countries comes from large portions. Have you ever helped yourself to a heaping plate of food only to eat half and then throw the other half away? Maybe you’ve gone to a buffet and gone up for seconds only to pick at the food and throw the rest out. In order to combat wasting so much food, stick to taking smaller portions so that you’re consuming that food instead of throwing it in the trash.

11 Awesome Websites That Will Help You Save Money
March 29, 2013
Follow Us
Some Handy Coupon Links