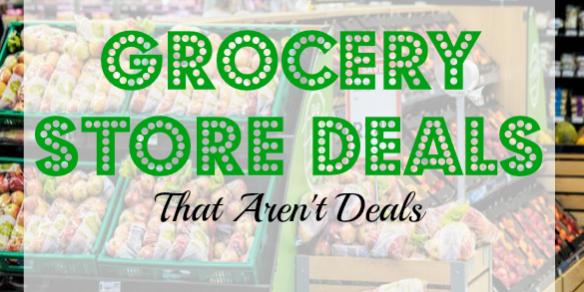 The secret that grocery stores don’t want you to know about is that the “deals” that they offer aren’t always deals. In fact, many of them are just a way to separate you from your money. Just because something appears to be a deal doesn’t necessarily make it so. So before you buy something, take the time to really think it through and determine if it really is a deal or not.

10 for $10 deals can be great if you know that you’re going to use all 10 items. For instance, if you eat a lot of beans then buying 10 cans will probably serve you well. But, on the other hand, if you only eat about one can of beans a year, then buying 10 cans is probably a waste of money. 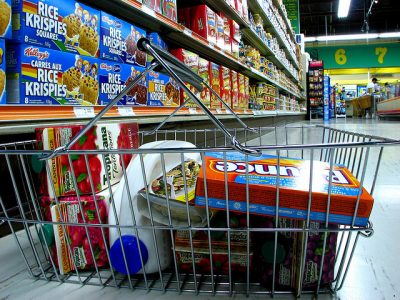 Grocery stores often place their seemingly “great” sales on their aisle endcaps. Sometimes these are pretty good deals, but more often than not, items are placed there as a ploy to get you to buy them. Stores figure that if the items are out in the open and easily accessible, you’re more likely to buy them, even if the deal isn’t all that great. In some cases, there might not even be a reduced price on these items.

Some people are drawn in whenever they think they’re getting something for free. But similar to the 10 for $10 deals, 10 for 1 deals aren’t that great. Would you honestly buy 10 items just to receive that 11th item for free? This deal is designed to get you so excited about getting buy viagra one free item that you buy all 10 items even if you don’t really need them. When it comes down to it, you’re not even saving all that much. If the items aren’t on sale, you’re paying full price for 10 items. Your savings amount to about 9% total.

Buy One, Get One Half Off

Like many of the “buy one” deals, buy one, get half off deals aren’t all that great. This is another deal designed to look wonderful but doesn’t end up saving you much in the long run. Technically you’re only saving about 25% of the total price for two items.

Have you ever immediately gone for the larger package of cereal or toilet paper instead of buying a couple of smaller packages? Sometimes the bigger packages are actually more expensive than the smaller ones. For instance, the unit price might be cheaper for the smaller package. So you might be able to buy two or three boxes of smaller cereal that will end up giving you more of the product for the same price as the larger package.

Sometimes sale prices are actually more expensive than the individual price. But some people see a sale sign and immediately assume it’s a great deal. For instance, say there are avocados on sale for 3 for $5. Avocadoes might be $1.25 individually, which means that 3 of them would cost $3.75. By taking advantage of the 3 for $5 deal, you’re actually wasting $1.25.

Many grocery stores are beginning to use “must buy” deals to hinder shoppers. For instance, you could have pasta be 10 for $10, but only if you buy all 10 boxes. If you only buy 5 boxes, you’ll have to pay the full price. This is the store’s way of making sure you buy all 5 or 10 items in order to get the “cheaper” price.

As stated earlier, some people become so excited at seeing a sale that they’ll buy it without stopping to determine whether or not it’s actually a good deal. Grocery stores take this into account and will take advantage of customers by setting deals that only take a few cents off an item. Many people prefer to see a nice rounded number such as $2.50 instead of a price such as $2.59, so the store might have a “sale” and bring the product down to $2.50. And 9 cents isn’t much of a deal.

A lot of grocery stores team up with certain businesses so they can offer special deals. For instance, they might team up with a gas station so that for every $50 you spend at the supermarket, you get $0.10 towards a gallon of gas. Or they might offer 1% back after you spend $100. While these deals seem great in theory, you’re not getting that much back for your money. Worst, the grocery stores hope that you’ll spend more money just so you get those extra deals.

Grocery stores have also become tricky with the coupons they accept. Some coupons are still great deals, but some are actually pretty bad deals. There might be a coupon that offers $1.50 for one $3.00 bottle of salad dressing, but only if you buy three bottles. Or they might only offer $0.50 off a $5.00 frozen entrée with the hope that you’ll be so swayed by the coupon, that you won’t mind spending the $4.50.