With Compliments Like That… Day 74: Eating Well On $1 A Day 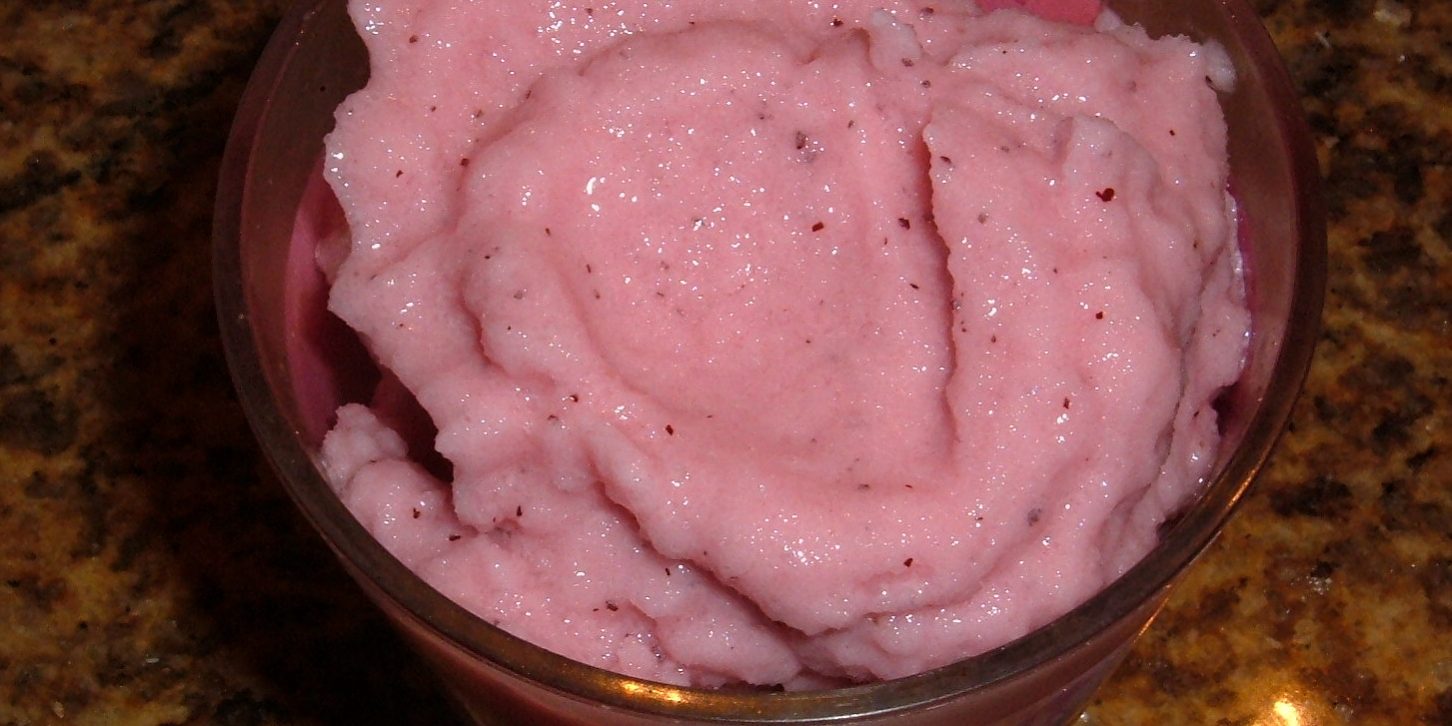 I was talking to some friends about this Eating Well On $1 A Day challenge when the following conversation took place.

Friend 1: “So why do you think that the blog has captured the attention of some people? I mean, there are others that have done things like this before you.”

Friend 2: “They see someone that seems to be doing something impossible with coupons and normally they would disregard it as completely impossible. But then they read about the rest of your life and they realize that if someone that pathetic in other areas of his life can do it, then they should be able to do it too.”

Friend 1: “Yep, he is right. You are an inspiration that way.”

Friend 1 & Friend 2: Both start laughing together as they realized what they had just said.

Friend 1: “No seriously, that was supposed to be a compliment.”

Friend 2: “And as far as pathetic goes, I did mean it in the best way possible.” (both uncontrollably laughing to the point tears form in their eyes)

Apparently the entire incident was amusing enough that they continued to reference back to it for the rest of the afternoon (and start their laughing fits all over again).

While I certainly hope that my life isn't quite as pathetic as my friends seem to think it is, I do hope that all that are reading this realise that anyone can adopt the basic strategy I'm using to reduce the amount they spend on food while getting a lot more (and the types of food they like). If I somehow managed to figure out how to do this with my acute dislike of couponing, then anyone can.

I'm still having thickness issues with the smoothies (still taste great) and I'm sorry that the apricot smoothies look like a thing of the past, but the cherry plums do make an excellent smoothie as well: 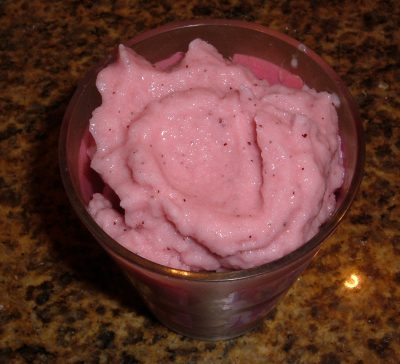 The pasta salad I made previously was perfect for an easy meal (the best kind in my book). I really do need to get better at making larger amounts so that I can use the meals later as a meal in itself again or as the base for another meal. Days just go a lot smoother when I don't have to create something new for each meal of the day. 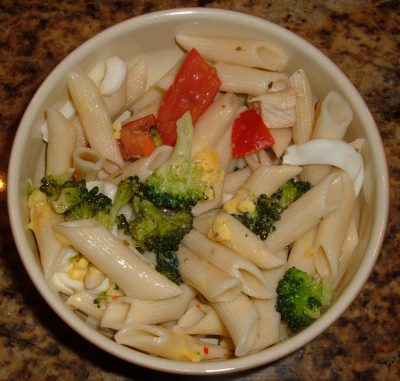 I did snack on a peanut butter sandwich in the late afternoon and finished up the rest of the toasted Wheat Thin chips.

I decided to try a new recipe sent to me by DeeAnn.

* Cutting board & knife
* Pasta pot & water
* Frying Pan & stirring spoon
* Pasta (as before, I recommend you cook extra for a later meal)
* 1/4lb ground beef
* chopped onion, (cut off a piece of onion about the size of a 1/3c measure; the diced chunks should be about the size of your pinky fingernail.)
* about a half-cup sliced mushrooms
* Garlic Powder (1/8 – 1/2 tsp, depending on how much you like garlic)
* Salt & Pepper
* Sour Cream (a tablespoon to 1/4c, depending on how much you like sour cream and how saucy you want the dish)

1. Put the pasta water on to boil; add the pasta when it boils and cook until done.

2. Meanwhile, brown the ground beef, onions, and mushrooms over Medium heat (or Med-High, if you want it took cook faster), breaking the meat into little chunks with the spoon.

3. When the meat isn't pink anymore, you can drain off the extra fat and water, if you want.

4. Add the garlic power, oregano, and a good-sized shake each of salt & pepper. Keep cooking, stirring occasionally (every 2-5 minutes, or whatever it takes to keep the food from sticking to the pan) until the meat and veggies are still wet, but there are no puddles left in the pan.

5. If the pasta isn't done yet, turn the heat to low and wait until you drain the pasta.

6. If you were waiting, increase the heat back to Medium and stir in the sour cream. Heat just long enough to make the sauce warm, but DO NOT let the sour cream boil: it'll get all funky-looking.

8. Add the pasta to the pan and mix everything together, then pour it out and eat.

I should have realised that I was heading for trouble when I needed to substitute the main ingredient (this recipe had been sent when I still had hamburger on hand). I decided I could pull it off with chicken instead and have “Chicken Stroganoff” –oh, if it were only that easy…

Things started off fine although another substitution needed to be made. I started boiling the pasta and threw chicken, onions and broccoli (substituting for mushrooms) to begin frying and added the garlic power, oregano, and a good-sized shake each of salt & pepper: 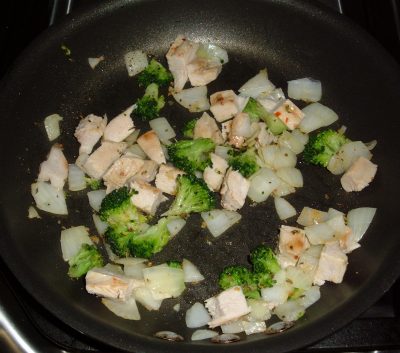 I went to the refrigerator to find that I had no sour cream (I had accidentally left when traveling for the house sitting). So I was missing a main ingredient, but was too far along to stop. The closest thing I could find to sour cream was ranch dressing (which, yes, I know is nothing like sour cream, but in the panic of the moment, they were both white — maybe my friends do have a more valid point than I wish to admit…) 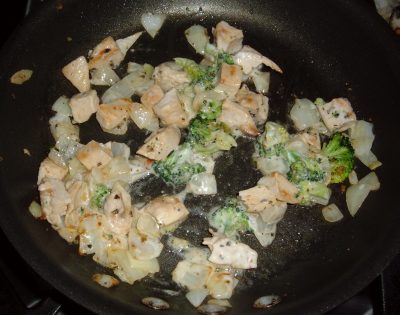 When it was all said and done, it basically tasted like a warm pasta salad which wasn't terrible, but I was looking forward to eating something that had a different taste. Chalk another one up to experience (with plenty left over for another meal) 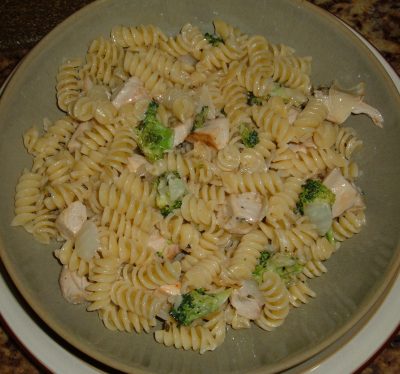