I can tell as this challenge goes on, I am getting lazy with the couponing. The good news is that I am able to do so because I have been able to stay well below the $1 a day goal. Some might think that this is bad and I should be focusing on getting better deals, but I disagree.

One of the most difficult parts of this challenge has been to get people to not focus exclusively on the $1 a day. I have said it before and I will say it again — I don’t think anyone reading this blog should try to eat on $1 a day. I think what each person should do is look at their current food budget and set a reasonable goal based on what they are currently spending. What this whole challenge is supposed to show is that there is a good chance that you can spend less and buy a lot more of the foods you want if you change your shopping habits a bit and incorporate coupons into your grocery shopping.

I was quickly running out of peanut butter and I had the choice of rationing it or stockpiling it and I chose to stockpile. CVS had a good deal and I had a $4 off $20 in my pocket as well, so I ended up getting 6 jars of Skippy Natural peanut butter, 2 tubes of Colgate toothpaste, 1 dozen eggs and 1 gallon of milk: 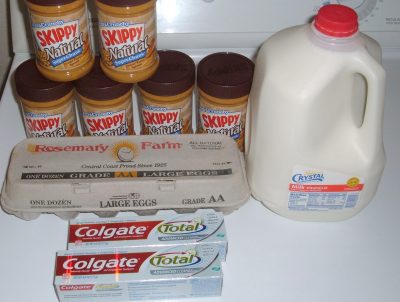 If I had planned a little better ahead, I probably could have gotten the peanut butter fro free. I wasn’t planning to get the eggs or milk, but made some calculating errors and forgot a coupon that meant that I needed to add some extras (thus the milk and eggs). In the end, I ended up spending $5.38 for all of the above. This is how I did it: 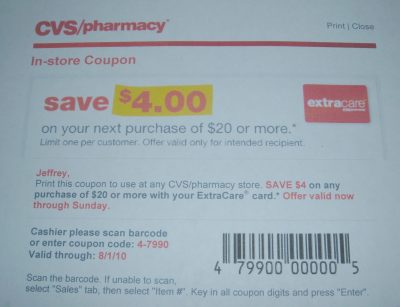 which would make the peanut butter free if I could get up to $20.00.

I also purchased 2 tubes of Colgate toothpaste using a $1.00 off 1 coupon:

It wasn’t until later in the day when I was doing the transaction again for Penny Experiment that I discovered that this coupon had actually expired (I offered to give the toothpaste back because I didn’t want to get the cashier in trouble, but the manager said that it was OK). I had planned to bring along a coupon for the proglide razor, but simply forgot it and that is why I needed to add the eggs and milk. In the end, I paid $0.40 out of pocket while also using $11.98 in Extra Bucks that I already had. I received $7.00 in Extra Bucks back:

The toothpaste will go to the local food bank and the rest of the food will go into my stockpile.

I also had the coupon meet-up and although Kelli and her group was the only one to show up, it was very helpful for me in thinking through how I will set up my basic guide and a pleasure meeting them. We actually went to Lucky grocery store together and did the 10 boxes of Kellogg’s cereal transaction together so she was able to get 10 boxes of cereal for $2.70.

She was also kind enough to bring me a bag of yellow cherry plums (the first time I have ever seen these) which she had foraged in her neighborhood: 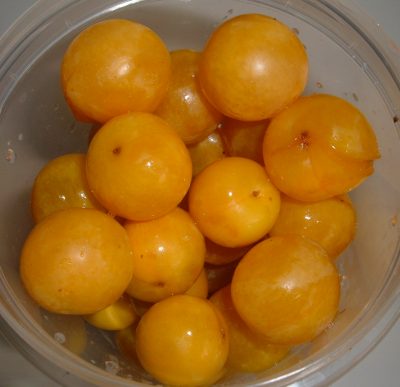 I started off the day in regular fashion with my morning smoothie – this time blackberry (fresh blueberries, frozen banana, ice cubes and a small amount of milk) 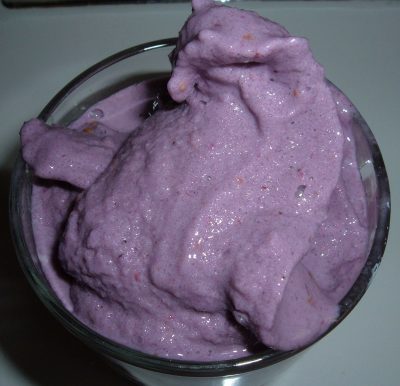 I made myself some cinnamon french toast (adding a bit of vanilla and cinnamon to the egg for the bread coating) topped with a blackberry and banana topping: 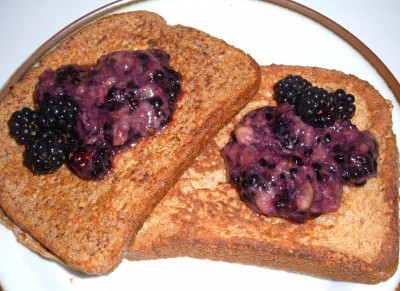 I took some extra whole wheat pasta I had cooked and made a pasta salad adding fresh spinach and tomatoes along with a sprinkling of cheese and a boiled egg: 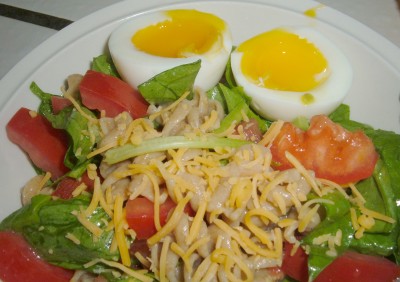