Should I Be Allowed To Buy Things For Others To Get Free Food? Day 51: Eating Well On $1 A Day 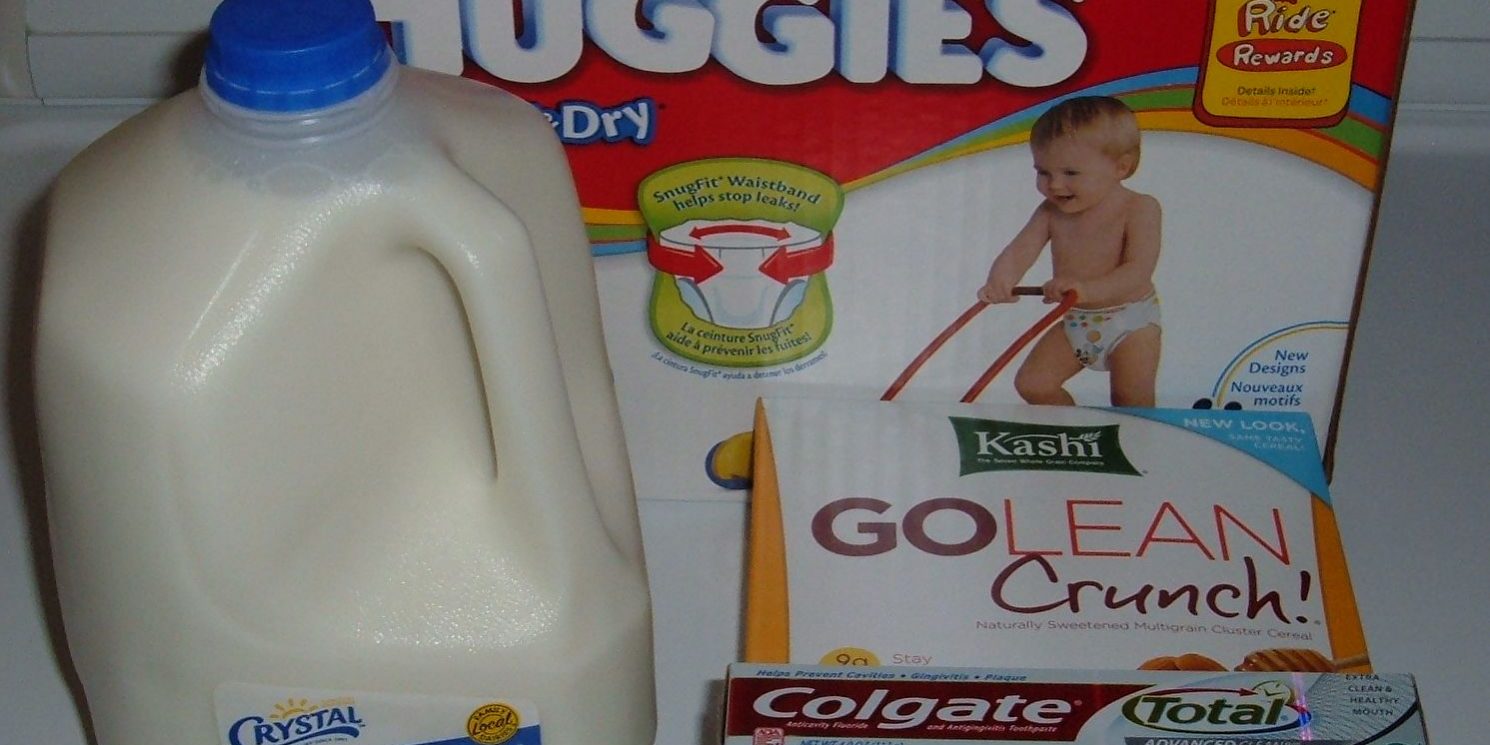 It looks like I need to turn to the readers here to decide on another rule for this challenge. I have had great success in getting free food from CVS when they have emailed me coupons for $x off when you by $x amount (it is definitely worthwhile to sign up on the ,a href=”http://www.cvs.com”>CVS website and they send this coupons to me on a regular basis). I received another one for $5 off a $25.00 purchase.

The only problem with this is finding $20.00 worth of free stuff so that I can get the last $5 in free food. This is especially true since I have sales tax to pay on non food items. I often have to pass on these coupons because I can't get to the amount needed without spending more than what the discount is for.

Another thing I have found is that the more of my friends and family know that I can get some pretty good deals, they ask me to buy stuff for them and then pay me back. This is what happened when my sister recently needed diapers for my niece. She read about the great deal on diapers at CVS and asked me to pick up some for her and she would pay me back.

I bought the diapers (free because my sister was paying me back) and 2 tubes of toothpaste (free with Extra Bucks and coupons) which put me over the $25.00 minimum I needed to get $5.00 off so I bought a box of Kashi Go Lean Crunch cereal and a gallon of milk (the toothpaste will be donated as I have far more than I need): 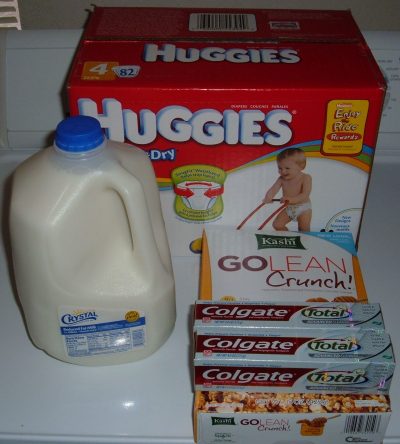 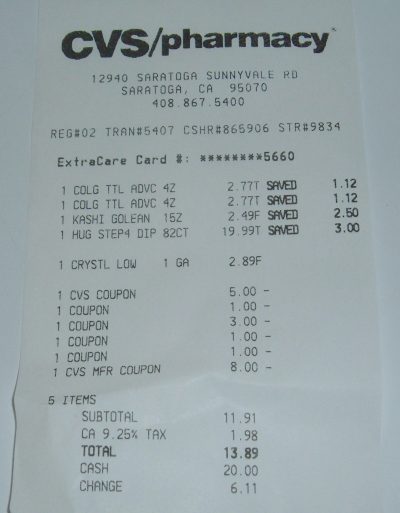 When I dropped off the diapers, I made sure to thank my sister for the free cereal and milk. She was not amused that she had actually helped me and challenged whether I should be allowed to get free food when buying things for others:

Sister's Argument: Since the stuff purchased wasn't free (she had to pay $8.85 for the diapers), the $5.00 should have gone toward reducing that cost. Someone had to pay for it so it wasn't really free even though it didn't happen to be me.

My Argument: I didn't go out seeking people to buy things so I could get free food, she came to me. I was asked to buy the diapers for her and simply figured out that by combining that with some other freebies available, I could reach the threshold for the $5.00 off coupon I had and get some free food for me as well.

So the question is, should I be able to use items that people pay me back for to help me get free food? Please let me know your opinion and feel free to comment on why you think I should or should not be able to do this. As per the new rules, I will abide by however the readers decide through the vote:

I am amazed at the amount of food that is all around when I actually pay attention. Now that I am always looking for possible foraging areas when I am out on my walks, I have been seeing opportunities left and right. This morning I was able to forage for some new fruit which I believe are loquats: 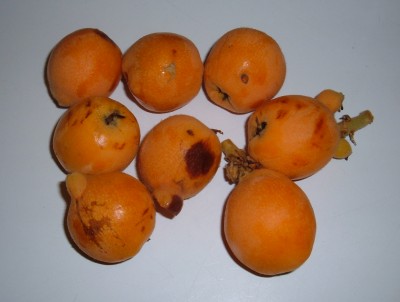 With the new fruit find, I had to give it a try in my morning smoothie (4 loquats, a banana, 7 ice cubes) and it turned out quite good. I will definitely be having more or these in the future for a change in taste from the blackberry banana smoothies: 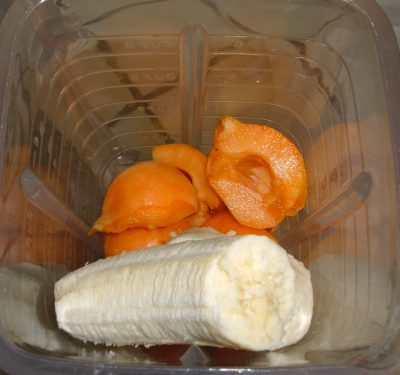 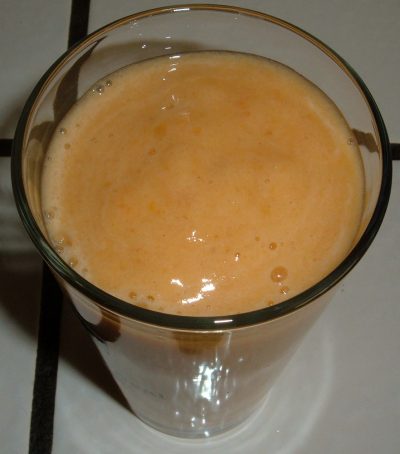 In the late morning, I poured myself a bowl of Corn Flakes and used up the last of the box I had on hand. I topped it with some of the blackberries I had on hand: 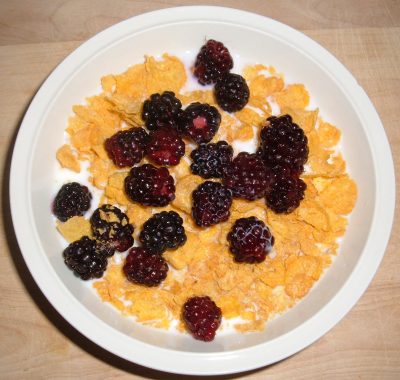 It was an extremely busy afternoon because I needed to get all my work done before heading off to the late afternoon father's Day BBQ we had planned. I didn't have time to make a proper lunch, so I simply threw together a peanut butter sandwich with nut clusters as a snack to get me through the afternoon: 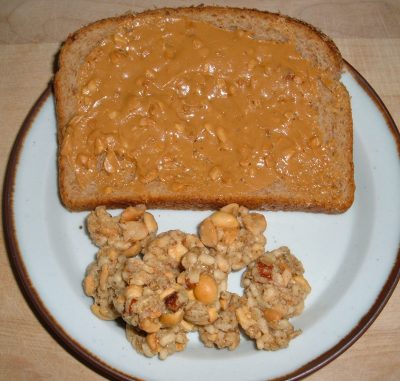 There has been a lot of discussion between my sister and I as to whether I should be able to eat the food at family gatherings, and I have a feeling that this will be another one you will all need to decide in the future. For this gathering, there were a lot of people that heard that I was doing this challenge and couldn't believe that I was actually able to eat well on $1 a day, so they wanted me to bring food so they could see what I would be able to eat. 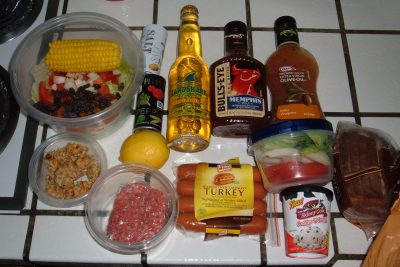 I ate the nut clusters while we were BBQing and everyone else was snacking on chips, dips and spreads. Everyone else had BBQ ribs with beans while I had a BBQ hamburger, a couple of BBQ turkey franks, BBQ corn and a salad. I had my beer and a slice of lemon to drink. While the ribs did look delicious, I think my meal stacked up pretty well to what everyone else was having: 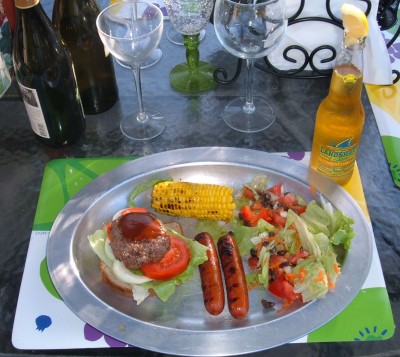 Then while everyone was having their dessert, I had my cup of ice cream. Everyone was pretty surprised at what I was able to eat and I had to keep reassuring them that I was still going to be able to eat fine for the rest of the week. There were a lot of questions about how exactly I did it and I think a few of the people there will actually give couponing a try.

The Beginning ::: Day 52: There Aren't Any Good Coupons