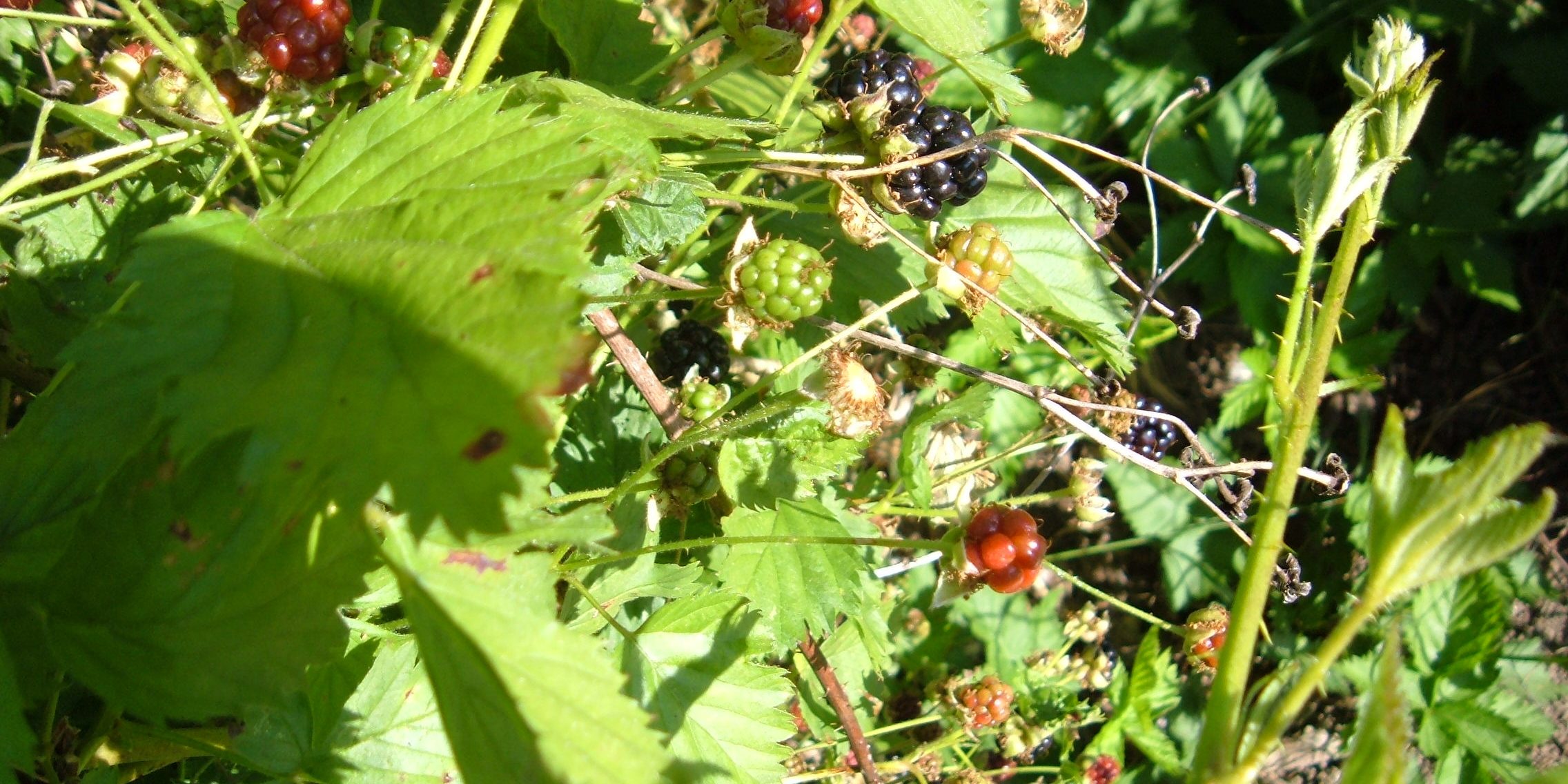 I have always been a big Costco fan and of the limited shopping I had done before beginning this challenge, I would say that most of it was done there. I had to make a run to Costco today to get some non food items, but that didn’t stop me from taking a few minutes to look around at the prices. I instantly realized how expensive Costco really is compared to shopping sales with coupons.

Granted, Costco is a lot more convenient and does give a good discount if you compare it to normal grocery store retail prices, but it would be difficult for me to buy much there on the $1 a day budget since it all has to be purchased in bulk (this is especially true since I am doing this only for myself — if i was doing a challenge where there were more mouths to feed, Costco could be a good place to get some food in quantity). It just goes to show that the more aware you are of prices that you can get on certain foods (and I am still learning a lot in this area), the more control you are in getting good deals when they come about and not simply paying what the “normal” price is.

I did go on my morning walk and was able to find a few more blackberries that had ripened (it is supposed to get hot this weekend and there are a lot of flowers all over the blackberry plants, so I am hopeful that I will be swimming in them in a couple of weeks) and I also found a raspberry plant where I was able to get a few raspberries as well: 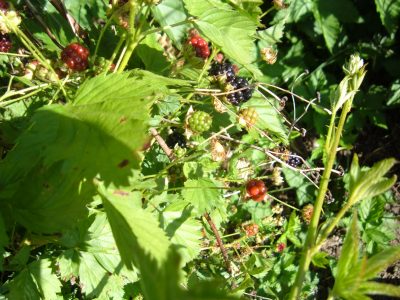 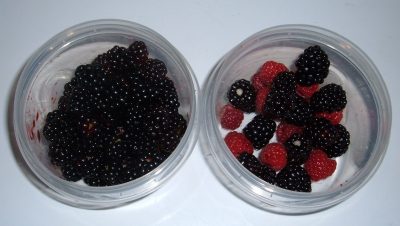 I think that I will head to the library this weekend and see if I can borrow a book on local edible plants (something that I know absolutely nothing about) to see what might be available to me.

For my early morning meal, I decided to use a banana that was beginning to brown along with my blackberry find to see if I could make a fruit smoothie. I simply placed 5 ice cubes, the banana and a handful of blackberries into a blender: 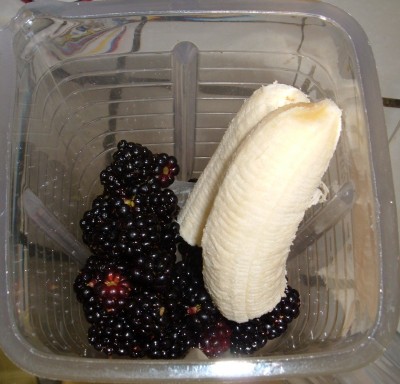 and was rewarded with this: 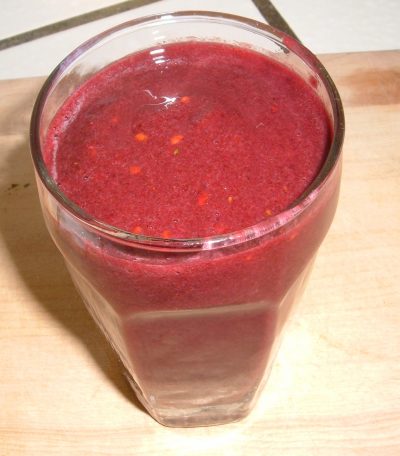 I was concerned that it might be a bit sour, but it turned out to be amazingly good. If I can have one of these each day during the summer, I am going to be really, really happy — and why I am anxiously waiting for the blackberries to ripen.

I am also happy to announce that I am finally getting the hang of cooking potatoes (I was getting worried there for a bit). This time I cubed them and fried them up with an egg and a piece of whole wheat toast on the side. I did use up my last bit of salsa which is something that I will need to replenish if possible. I also had a bowl of Cheerios with the raspberries that I had found on top: 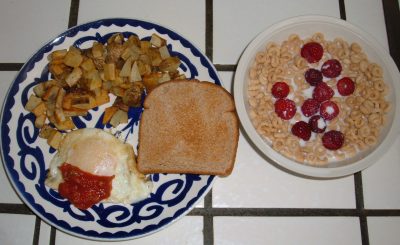 I still have the chicken deli meat so I decided to use that. I put that on whole wheat bread, added a bit of grated cheese, put a bit of oil in a pan and made a toasted chicken and cheese sandwich. I also cooked up an ear of corn and had half of that with a large handful of tortilla chips. I also decided to try the South Beach Living S’mores Fiber Fit bar sample I had received (overly sweet for me): 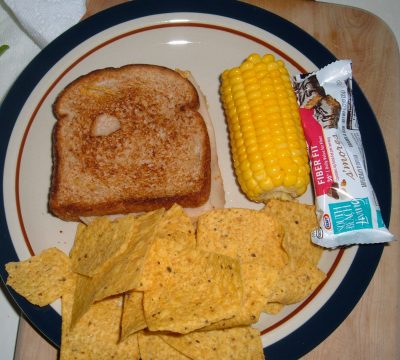 I decided to put some of the ingredients I had into a recipe search engine to see if there were any recipes that looked appealing and wouldn’t take an overly long time to prepare. I found something for called Avgolemono that I decided to try and immediately came to some conclusions:

1) I should not try and cook things that I have never heard of before.

2) I should not try to cook things I can’t even pronounce.

3) I need step by step photos with my recipes.

4) Since it is already obvious that I have no clue what I am doing, I should follow the directions and not try to improvise.

I took the rice out of the Hamburger helper package (about a half cup)and cooked it in two cups of water adding a cube of the chicken flavor bouillon. Since I had a little broccoli and carrot that I had steamed left, I decided to add that to the rice. I then took an egg and squeezed the juice of one of my foraged lemons into that and mixed it up. I added a bit of the hot bouillon to the egg / lemon mixture, mixed it up some more before adding it to the rice. I let it cook a little more and this is what I came up with: 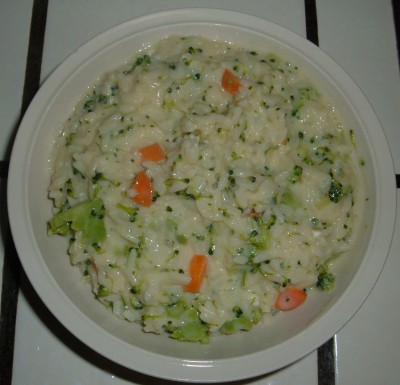 I definitely put too much lemon in it as it had a slight sour taste to it (I don’t mind sour, but this was a bit too much). I have no idea if I even came close to making what I was supposed to be making. It was edible and I did eat it all, but I think I should stick with some more basic recipes that I actually understand for the time being.