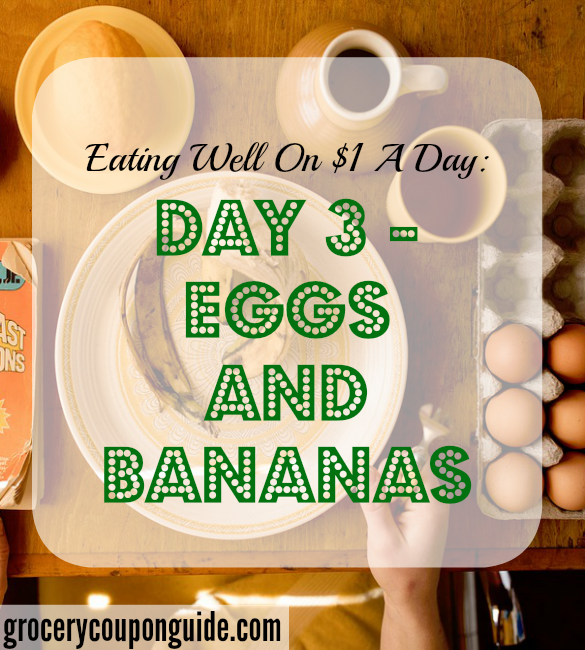 Day three had to be better than day two because if it wasn’t, there was no way that I was going to be able to complete this challenge (or stay alive). Luckily, it was much better and I learned a few more things about my eating along the way.

I started off the day deciding that I needed to get two things: some eggs and some bananas. I used the Philadelphia cream cheese coupons I had found from the blinkie coupon machine the day before to help bring down the costs of these. 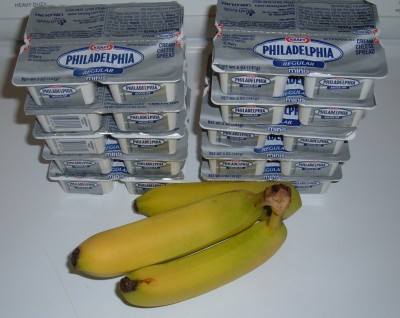 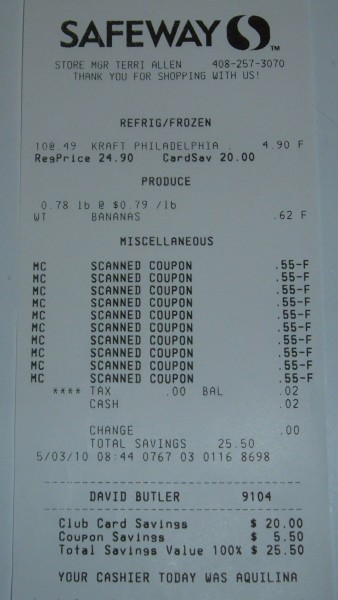 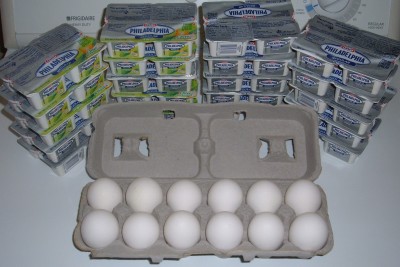 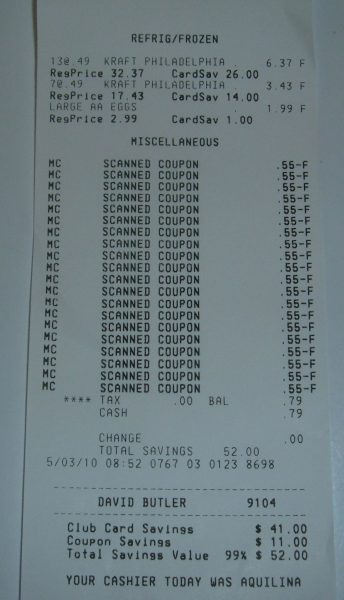 I also decided to buy some cereal. The local Lucky grocery store was having a deal where if you bought 4 boxes of cereal of Kelloggs Corn Flakes, Fruit Loops, Apple Jacks and Corn Pops, the price for each box would be $1.39 each. I also had a few Blinkie coupons for $0.70 of 1 for Fruit Loops, Apple Jacks or Corn Pops and two (since that is my limit rule</a.) $1.00 off 2 Corn Flakes coupon from the April 11 Red Plum Sunday newspaper insert. I used 2 of the blinkie coupons and one of the Corn Flakes coupons which brought down the price from $5.56 to $3.16. There was also a Kelloggs Catalina coupon promotion (the coupons that come out when you pay at the cash register) for $3.00 making the final price $0.16. I already had a $3.00 off my next purchase coupon because I had done this deal to buy over 600 boxes of cereal for local food banks (if I didn’t, I would have had to pay out $3.00, but I would still have the $3.00 coupon to spend which is the same as cash). I did this transaction 2 times to get 4 boxes of Corn Flakes, 2 boxes of Fruit Loops and 2 boxes of Apple Jacks: 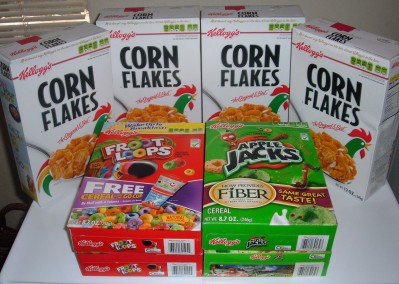 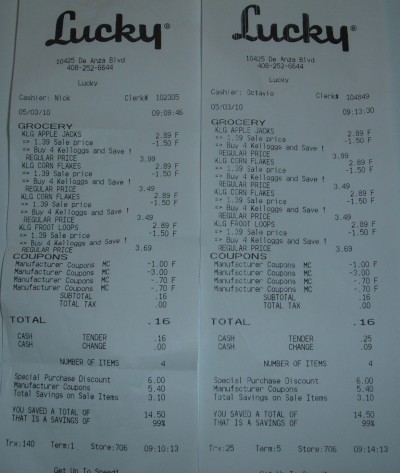 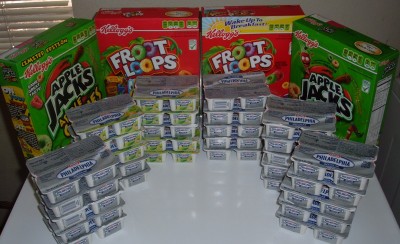 With morning shopping out of the way, it was time for breakfast. I decided to take a portion of the rice I had left over from the day 1 dinner, mix it with a couple of eggs I had just purchased and put it in a whole wheat tortilla with a half apple on the side: 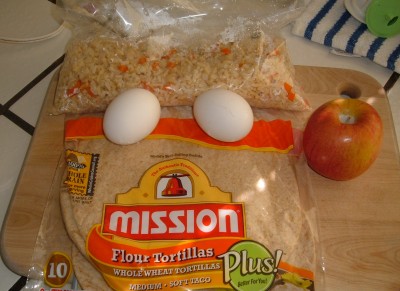 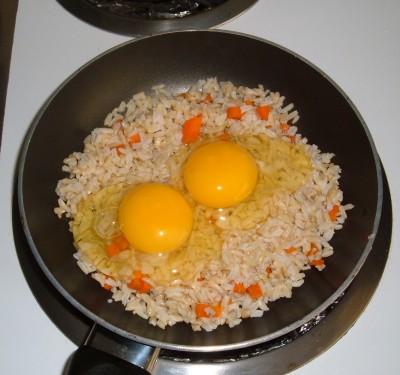 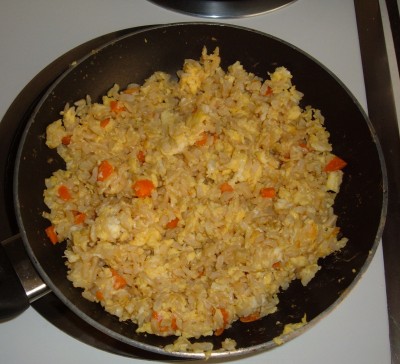 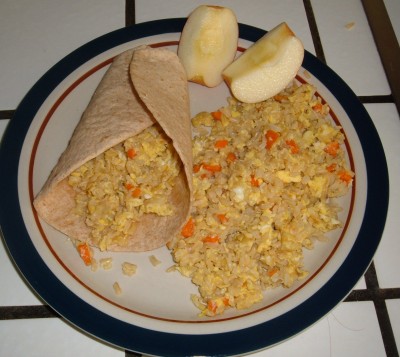 The rice and eggs were pretty bland and since I don’t have any salt, pepper or other seasonings I had to get a bit creative. I went and got the box of Wheat Thins that I had finished the night before when I wasn’t feeling well and took all the excess salt at the bottom of the bag and put it into the rice and eggs — perfect!

For lunch I had peanut butter and a banana wrapped in a whole wheat tortilla. I have also discovered during this challenge that I am much more aware of when I am full and stop when I am (as opposed to forcing everything down on my plate that I would have done before). That left half of the morning tortilla to eat as well. I added the other half of the apple and Wheat Thins as well: 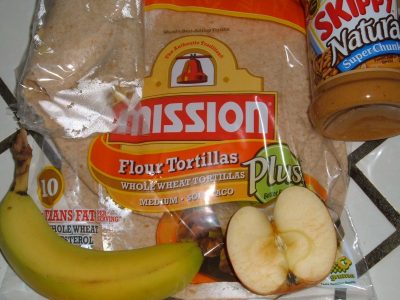 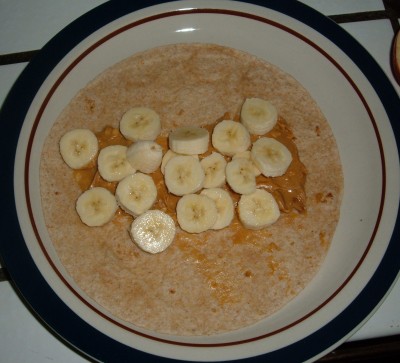 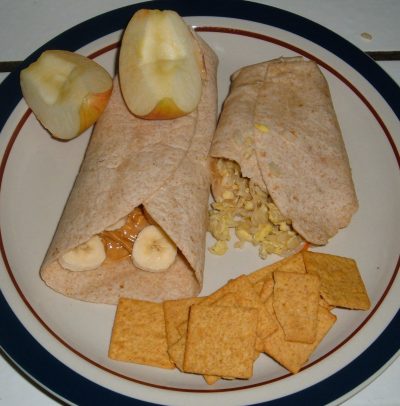 It was wonderful – I love peanut butter and bananas and together you can’t go wrong.

For dinner I steamed a couple of carrots. I then reheated the rest of the rice, cut up half a avocado, added a bit of sour cream and wrapped it in two whole wheat tortillas: 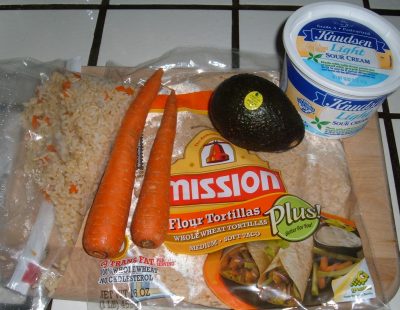 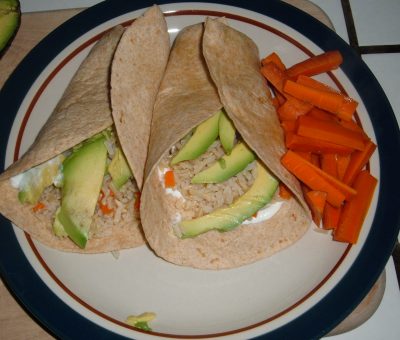 Again, it was a little bland at first bite and I had to go to the Wheat Thins box to extract the last of the salt to give it a bit of flavor. I actually filled up after the steamed carrots and one of the avocado and rice tortillas, so I have the other one in the refrigerator for day four meals.