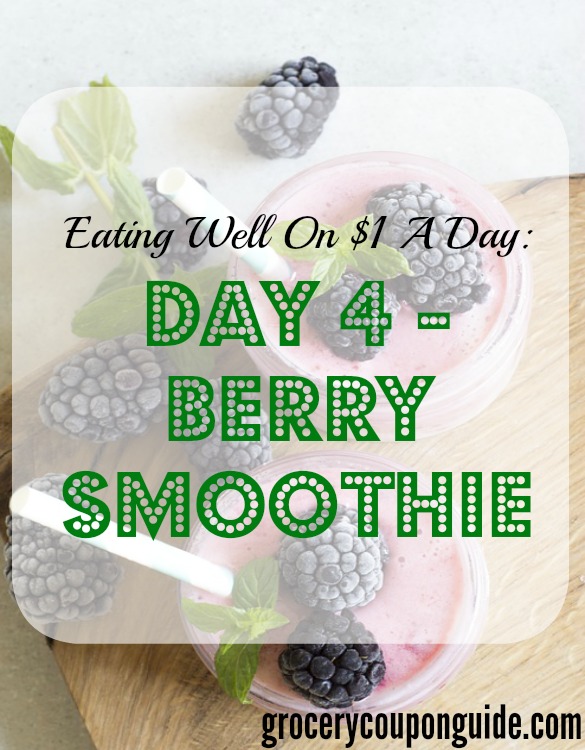 The day started off wonderful. I woke up and decided that I would have cereal for breakfast. The question was would I eat it without milk or not. I decided that I really needed to have milk with it for it to be breakfast (and not a snack), so I went to the store. There really weren’t any good prices on milk and it was anyone’s guess when the next milk sale would come, so I bit the bullet and bought a half gallon anyway. I used up the last five Philadelphia cream cheese mini Blinkie coupons I had to bring down the price a bit and since today is the last day of that promotion, I won’t be able to use that anymore. It still put me back $1.69 – nearly 2 days worth of meals: 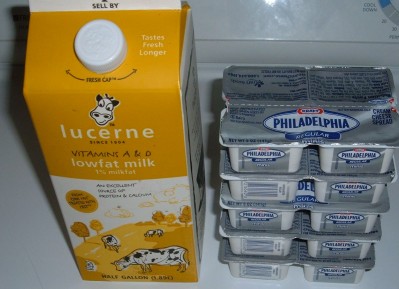 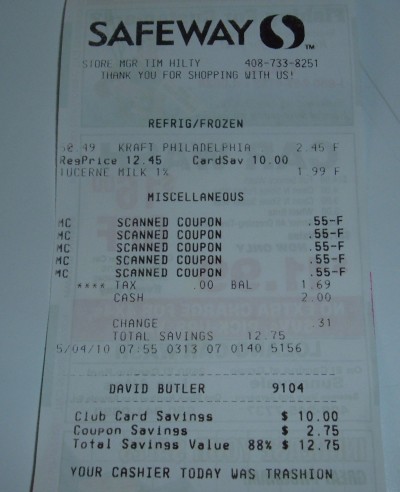 Since I already have plenty of the cream cheese, I will donate those to the local food bank as well. With milk in hand, I made myself a bowl of Corn Flakes with half a banana on top and milk. I liked it so much that I had another bowl as well and finished off the banana: 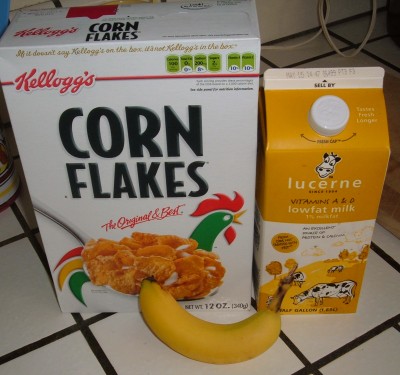 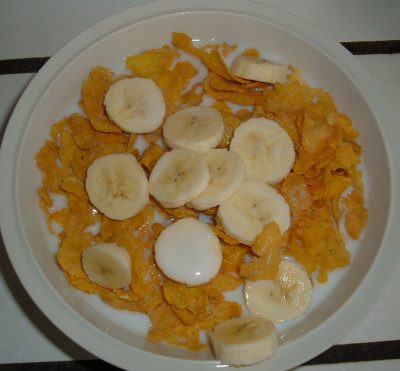 After breakfast, I made a trip to my local food bank to deliver over 600 boxes of cereal I had purchased for them using the Kellogg’s coupon and catalina deal (this deal ended yesterday) I used to get my cereal. I also delivered all the items that I have listed that I would donate to food banks, so they are now gone from the house. 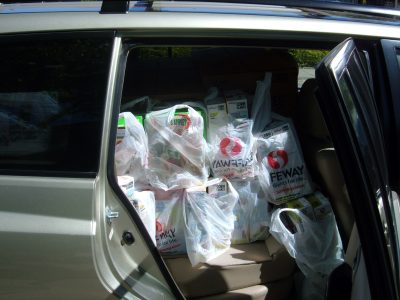 For an early lunch, I had a Berry Smoothie – unfortunately not the kind that you are probably imagining. After my episode on Day 2 where I needed to go to the emergency room, the staff told me I needed to see my doctor if I still had any pain or tenderness the next day. I did, so I made an appointment and the doctor said she wanted to have me take a CAT Scan to make sure that the problem is not my appendix. As part of the CAT Scan, I had to stop eating 4 hours before it and drink to “Berry Smoothie Redi-Cat 2” drinks of Barium Sulfate Suspension (doesn’t sound quite as appetizing as the real thing, does it?). They were free (paid for by insurance), but I’m not sure you can call them food. 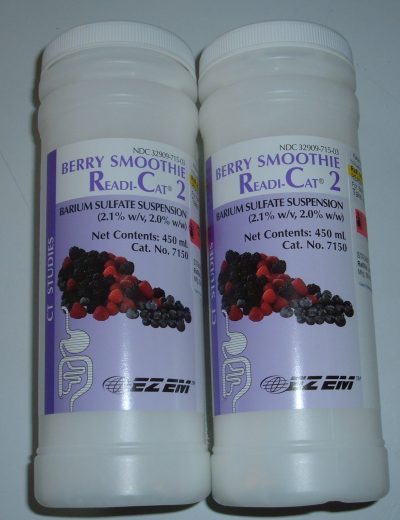 By the time I got out of the radiology department and back home, I was starving and ready to chow down a late lunch. Then the phone rang. It was my doctor saying that while my appendix looked fine, they had found an abscess in my intestinal tract and I needed to get to the emergency room so that the surgeons could decide whether it needed to be removed. She also said that I shouldn’t eat anything if I haven’t yet…

So it was back to the hospital emergency room where after waiting several hours in the room I was informed that the surgeons decided not to operate, but give me antibiotics to fight the infected area. I ended up getting home at 9:00 pm absolutely starving – I ate the avocado and rice burrito I had left over from the night before and a peanut butter and banana tortilla (sorry, I was too exhausted to take photos and since I have already had both before, I figured you wouldn’t mind this time)

The current thought process of the doctors is that I have some type of intestinal issue that caused the abscess and I will be making an appointment with a gastrologist today. This poses some questions if I should continue this “eating well on $1 a day” challenge.

Thus far I have managed to eat fairly well. There are areas where my diet has improved and other areas where it has gotten worse since starting this, but overall I think it has remained about the same. I am eating less fruit and vegetables than I was before (I used to snack on these throughout the day), but I have been able to still eat some on a daily basis. On the better side, I have cut out all the chocolate, ice cream and other junk food that I had also been snacking on throughout the day, as well as eliminating a lot “ready-made” meals. I haven’t decided whether cutting out meat (I hope to get some of these during this challenge) has been a good or bad thing yet as I mainly ate chicken and fish before.

This medical issue also throws a whole new challenge into this experiment. I may need to buy certain foods which will make it much more difficult to get a good deal over the short run. For example, since I will be taking antibiotics for the next 10 days, I need to buy probiotic yogurt (as recommended by my doctor) to reinsert the good bacteria into my gut that the antibiotics kill off. I also will have to add a small early morning meal or snack (one of the antibiotics requires it to be taken with food while the other has some dairy and mineral restrictions that could cause problems if I waited to take it with my full breakfast). While this will make the $1 a day goal more difficult, these things happen in life and if I can manage to do this, it will show that circumstances don’t have to be perfect to pull it off.

In the end, if I feel that this challenge will affect my health in a detrimental way or from a doctor’s recommendation, I will stop it. I’ll just have to see what they finally determine and go from there…