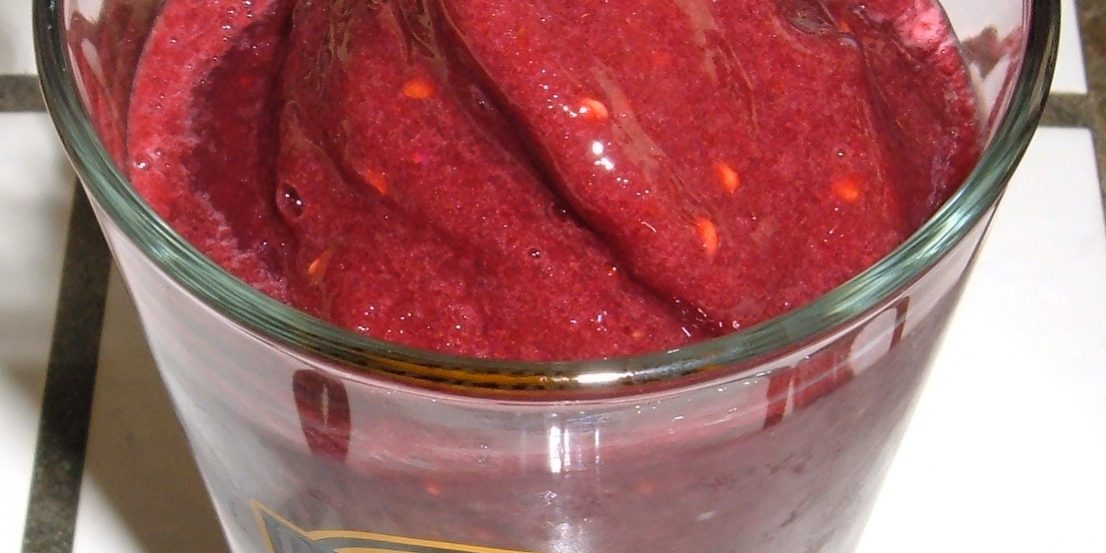 Apparently, wildlife wasn’t particularly happy about my foraging today. I should have known that it was going to be rough when I had a ten minute standoff with an angry squirrel as I tried to make my way to the lemon tree (no, it wasn’t my most manly moment. All I can say is that I’m happy that there wasn’t anyone around with a video because there is no doubt it would have ended up on YouTube to my immense shame. In my defense, however, I grew up watching Monty Python, so I tend to fear cute, agitated animals).

Then while walking toward the river, a baby snake scared the crap out of me (I know how this cat feels) when I almost stepped on it: 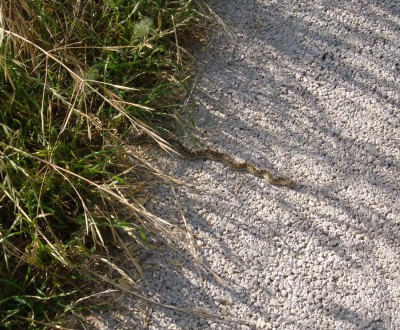 Then when I did find a new patch of blackberries, the bees were already busy collecting pollen and didn’t seem all that happy so have me around searching for ripe blackberries making me run for cover 2 times. Then even the blackberry plants got into the action by making sure I left with war wound scratches on my arms and wrists for the blackberries I did claim. I think I will do something to appease Mother Nature before my next foraging trip…

Even with wildlife against me, the foraging was successful with 2 containers of blackberries and 8 lemons: 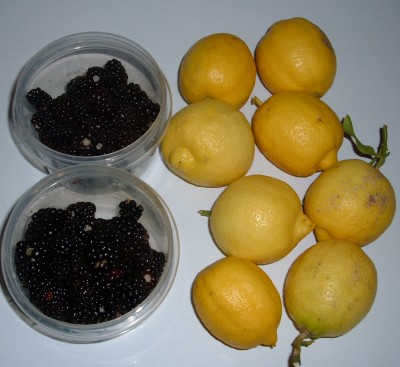 In addition to foraging, I made a grocery store run to use some of the Rolaids ($1.49 each when 8 mix and match purchased using
$4.00 off 2 any Rolaids from the 6/6 RedPlum Sunday coupon insert
making it a $1 moneymaker when you buy 2) coupons I had. I ended up getting 30 boxes of Rolaids (which will be donated) that allowed me to buy the following: 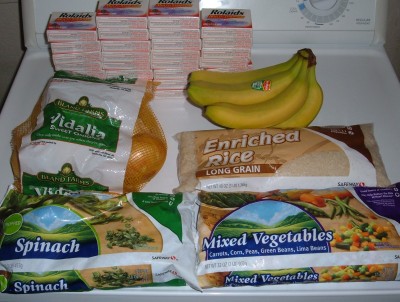 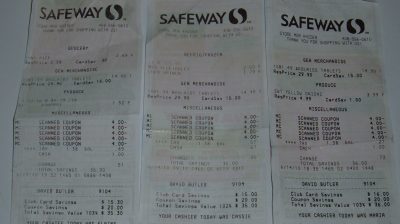 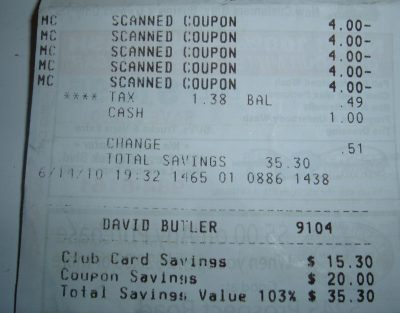 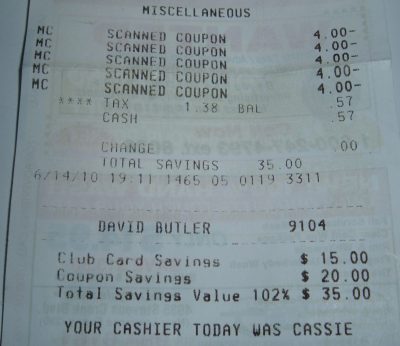 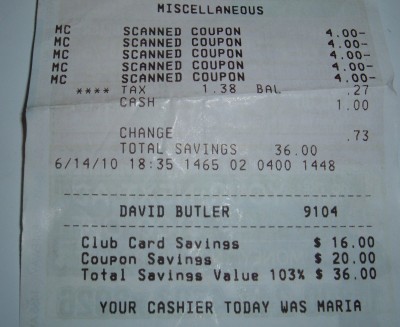 I still have coupons to make a couple more trips (I stopped because I didn’t want to run the grocery store out of Rolaids so that there were plenty of others could also take advantage of the deal). There is also a great money making deal at CVS (and other drugstores) this week which I will definitely have to do as it will be quite helpful with the limited budget.

This is what I had during the day:

After the nature ordeal, I was going to fully enjoy my hard earned finds with my new favorite way to get new energy after my morning walk: 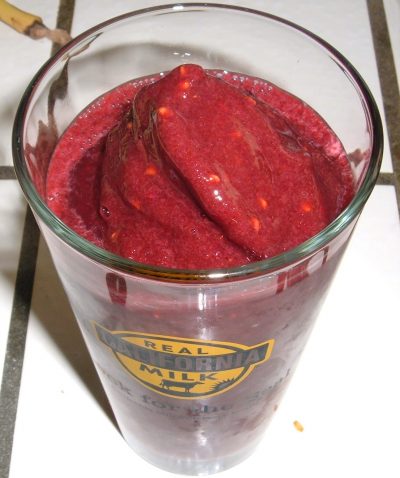 Several people had mentioned that I had the ingredients for French Toast, so in the late morning I made some whole wheat cinnamon French Toast (egg, milk, cinnamon, vanilla flavoring) topped with blackberry and banana mixed together: 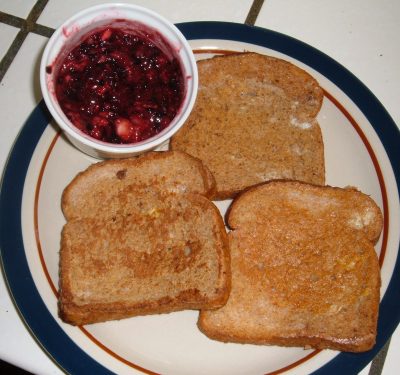 I had the rest of the Poorman’s Meal that I made yesterday to fill me up in the afternoon. 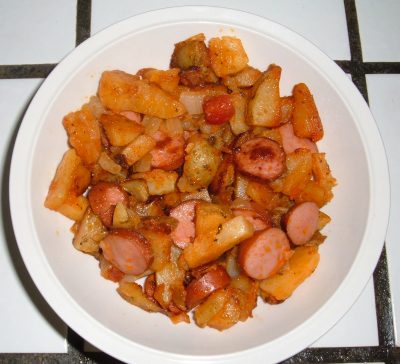 Thanks to DeeAnn, I decided to try making a Potato Veggie Chowder soup for dinner. Here are the directions she gave me:

Stuff you need:
Stove
Saucepan
Measuring cup
Cutting board and knife
Potatoes (1 or 2 per soup meal you want to make)
Frozen Veggies (about half as much corn as potato)
onion
Water
Chicken bouillon cubes
Milk
Pepper (and maybe salt)

How to make it:

1. Cut up the potato (the same way you do for diced potatoes, or use leftover fried potatoes)

2. Add the potato chunks to the pot.

3. Throw in a handful of 1/2 an onion and shake on pepper until it you have as much pepper as you would want on your hash browns.

5. Check the measuring cup to see how much water you used. Add 1 bouillon cube per cup of water.

6. Add milk to the pot until the potatoes are completely covered.

7. Bring the soup to a boil, then turn down the heat to Med-Low and put a cover on it. Check the soup in three minutes. The mixture should bubble a little if you look at it for a few seconds, but not boil like crazy.

8. Cook for about 7-15 minutes, stirring every 3-5 minutes, until the potatoes are almost done.

9. Throw in the frozen veggies and stir. Cook another 3-10 minutes, until the veggies are done.

10. Taste the soup. Add salt and pepper if tastes boring. 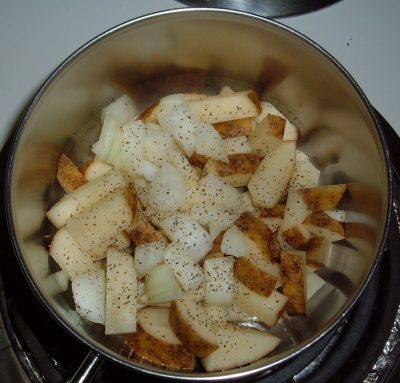 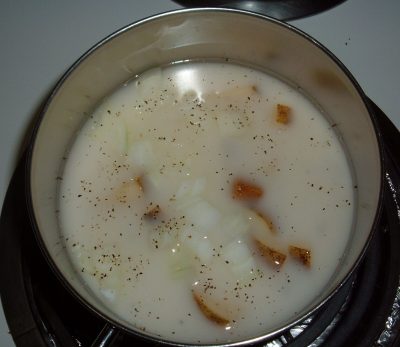 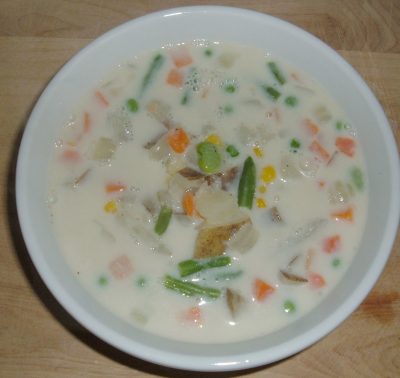