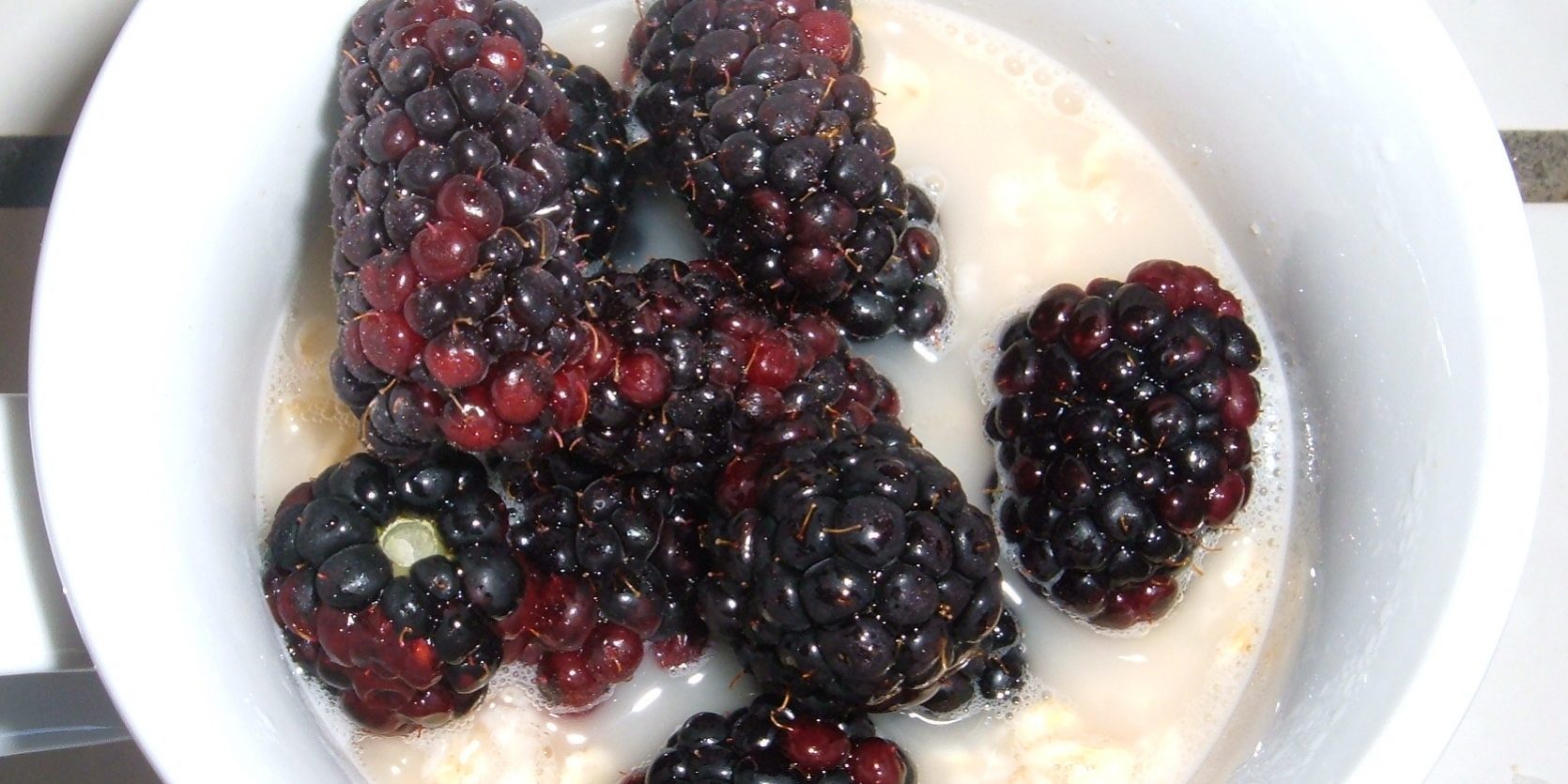 It kind of scares me when people start to think I hold some special shopping skills to be able to get the deals I have been getting. Believe me, I don’t. I’m the least likely person to ever be doing something like this and I still am not sure how I got conned into doing this (I’m supposed to be on a tropical island sipping fruity drinks and swimming in the ocean ever morning). I don’t enjoy couponing very much, so I make the process as simple and painless as possible. Anyone with an ounce more motivation than I have (which probably includes 99.999% of everyone reading this) could do better than I have been doing.

I’m a newbie. I started couponing for the first time at the beginning of this year because of another project where I am trying to help food banks. I knew that there were “super couponers” out there and so I asked them to teach me. What I found is that there are a lot of misconceptions about couponing and I held many of them. Once I learned how the couponing system really works, it really isn’t that difficult at all and believe me, if I can do it, anyone can.

I’m still learning. I still make mistakes. I miss a lot of deals because I am not willing to put in hours of extra work looking for every possible savings out there. My system is pretty simple and straightforward — look at the stores best 5 deals each week and buy things that are free / nearly free — or those items that make it so I can buy other things I need / want at greatly reduced prices.

By far the biggest obstacle to getting started is not having 2 months of Sunday paper inserts at home. This is mainly a frustrations factor that makes people quit before they see the benefit. Online printable coupons will make for some good deals, but it is frustrating when you see deals that you can’t participate in because you don’t have the coupons. If you are considering giving this a try, start saving your Sunday coupon inserts (simply date them and file them away — no clipping) and figure out how you can get as many as possible each week. The more you have, the more you will be able to save and you will be in great shape when you finally decide to take the plunge anytime in the future.

There really aren’t secrets (it’s more of learning about all the ways that you can save that you probably have been unaware of up to this point) and most of it is common sense and changing the way you shop. I’m not sure if this project has inspired many to give couponing a try, but if it has, I encourage you to start off slowly and build as you gain more confidence. Even if you cut your grocery bill by only 10% (and you will cut it a lot more than that), you are getting a much better return than you could on any other investment.

A number of people have asked if I will put together a short tutorial on how to begin. I’m not sure that I am the best person to do this, but I am working on a basic guide on how I go about it for those that want to get some good deals, but don’t want to spend a whole lot of time doing it (let’s hear it for lazy couponing!)

I have decided that having a fruit smoothie is a perfect way to start a day and I will be doing this as often as I can. It’s simple, good for me, takes practically no effort and tastes wonderful. Today I upped the ice content to 7 cubes (instead of 5) to make it not quite so thick. The only other things I added were a handful of blackberries and a banana. This was the result: 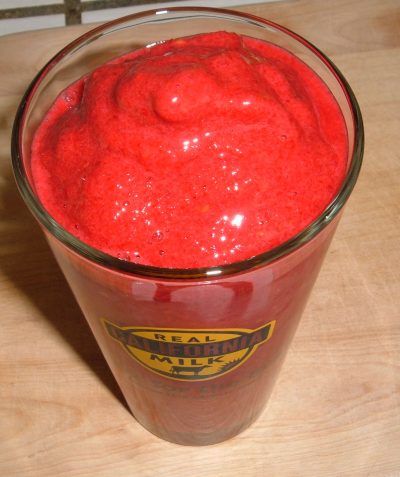 The weekend continued to be quite busy and I didn’t have a whole lot of time to make meals, so I ended up making easy to eat snacks / meals the rest of the day. In the late morning it was a bowl of Cheerios with banana on top: 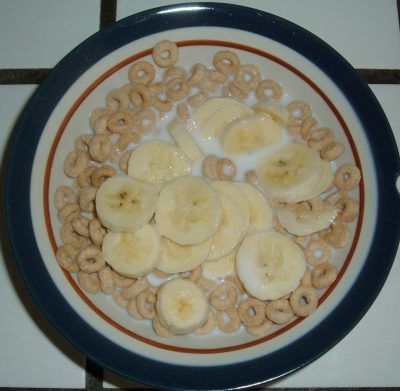 In the early afternoon I decided to take out the Honey Nut Cheerio pancakes from the freezer that I had made a couple of days before. 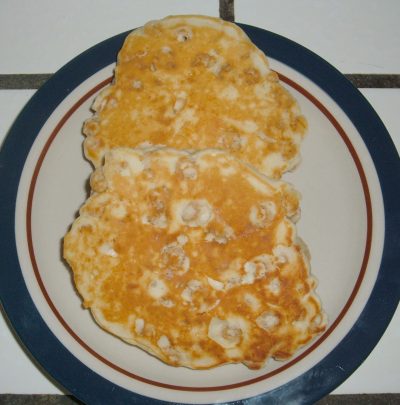 Unfortunately, they were not nearly as good as when they were made – the Honey Nut Cheerios had lost their sweetness and crunch, so I added some peanut butter topping to give them a bit of flavor: 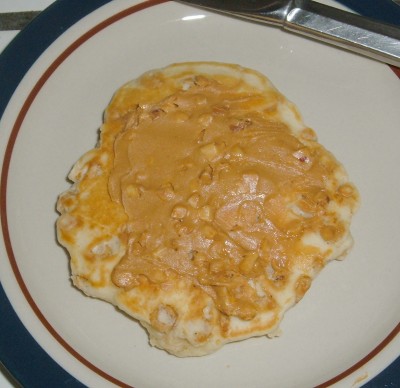 Later in the afternoon, I took some of the leftover scalloped potatoes and corn and heated them up: 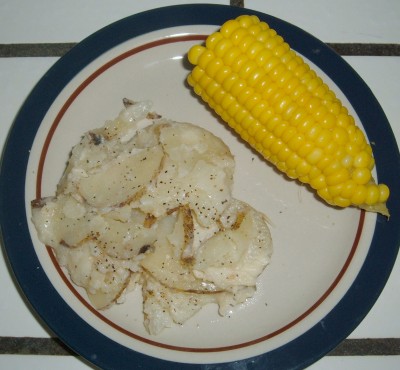 I received an email from Kelli suggestion that I try a meal from the Great Depression Cooking series (several others had mentioned this series in the early days of the challenge and I decided then that I wanted to try at least one meal at some point) Since I had all the ingredients for the “Poorman’s Meal” I decided to give it a try:

I followed all the instructions pretty much to a T (I was considering changing the couple of table spoons of pasta sauce to BBQ sauce, but ultimately decided against it). Then I made a small lettuce and carrot salad which I topped with Italian dressing: 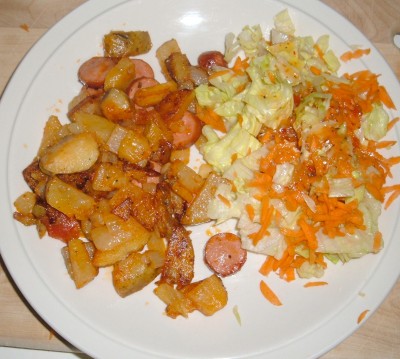 I am beginning to run low on veggies, so I am hoping to make a trip to the grocery store tomorrow to stock up a bit. Now if I only had another 8 hours in each day…

The Beginning ::: Day 45: Fighting With Wildlife