I made a huge couponing mistake. Somewhere in the back of my mind I knew that the Kraft money making deal was ending, but I had thought it was on the 30th. I had about 10 coupons left that I was planning to use for myself to get some more free food and stock up on salad dressing. I was just about to head out the door, but something stopped me from going and look at the deal on the Internet again – and I saw that the Catalina ended over the weekend. While I am disappointed that I missed out on some free food for myself, I am far more disappointed that I failed to get the extra free bottles of salad dressing for the food banks. The coupons don't expire until August, so I have my fingers crossed that another deal comes about so I can redeem myself before they expire.

I was with a group of friends and someone asked me if I would like a piece of gum — and the ensuing debate was whether or not gum is food? While obviously it is not food in the traditional sense, the debate surrounded around if I happened to want some gum and bought it, would that have to count against my $1 a day. There was a pretty even split so I decide that it should go to a vote. Please feel free to comment and leave your opinion on this question:

Since I didn't have time to explore and see if I could forage any fruit in the new area, I went with the blueberry drink banana smoothies again. While it is good, the real fruit smoothies are much better, so I'll be doing a little bit of wandering in the afternoon to see if I can find something new for tomorrow:

I decided to try and fry up some hash browns, but it doesn't work nearly as well without oil. I did squeeze out all the water from them which helped a bit, but it would have been much better if I had oil. I paired them with a cup of yogurt with Kashi cereal mixed in: 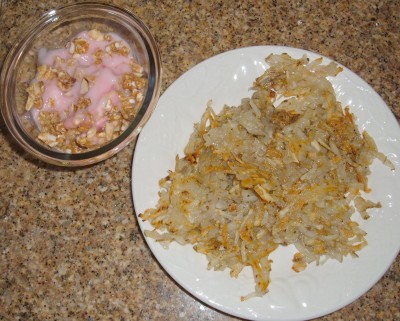 It was another busy day so lunch was on the fly – it consisted of a peanut butter banana sandwich and a small salad (lettuce, spinach, tomato and onion) which I failed to take a photo of…

Later on I made a spinach, mushroom and tomato omelette. I used the oil from the salad dressing to cook up the mushrooms and spinach and then placed the tomatoes freshly on top. I also finished off the rest of the mashed potatoes I had: 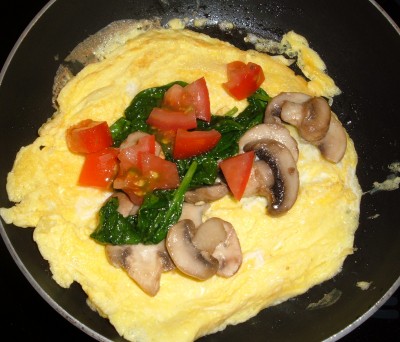 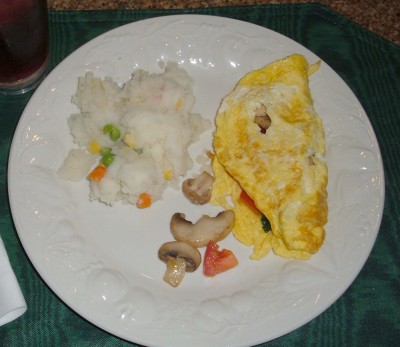 There was also a lot of little snacking throughout the day. When I get back home, I will need to do a full inventory of what I have left and it will definitely be time to do another shopping run to stock up on basics.

The Beginning ::: Day 60: Is It Acceptable To Bring Your Own Food To The Movie Theater?