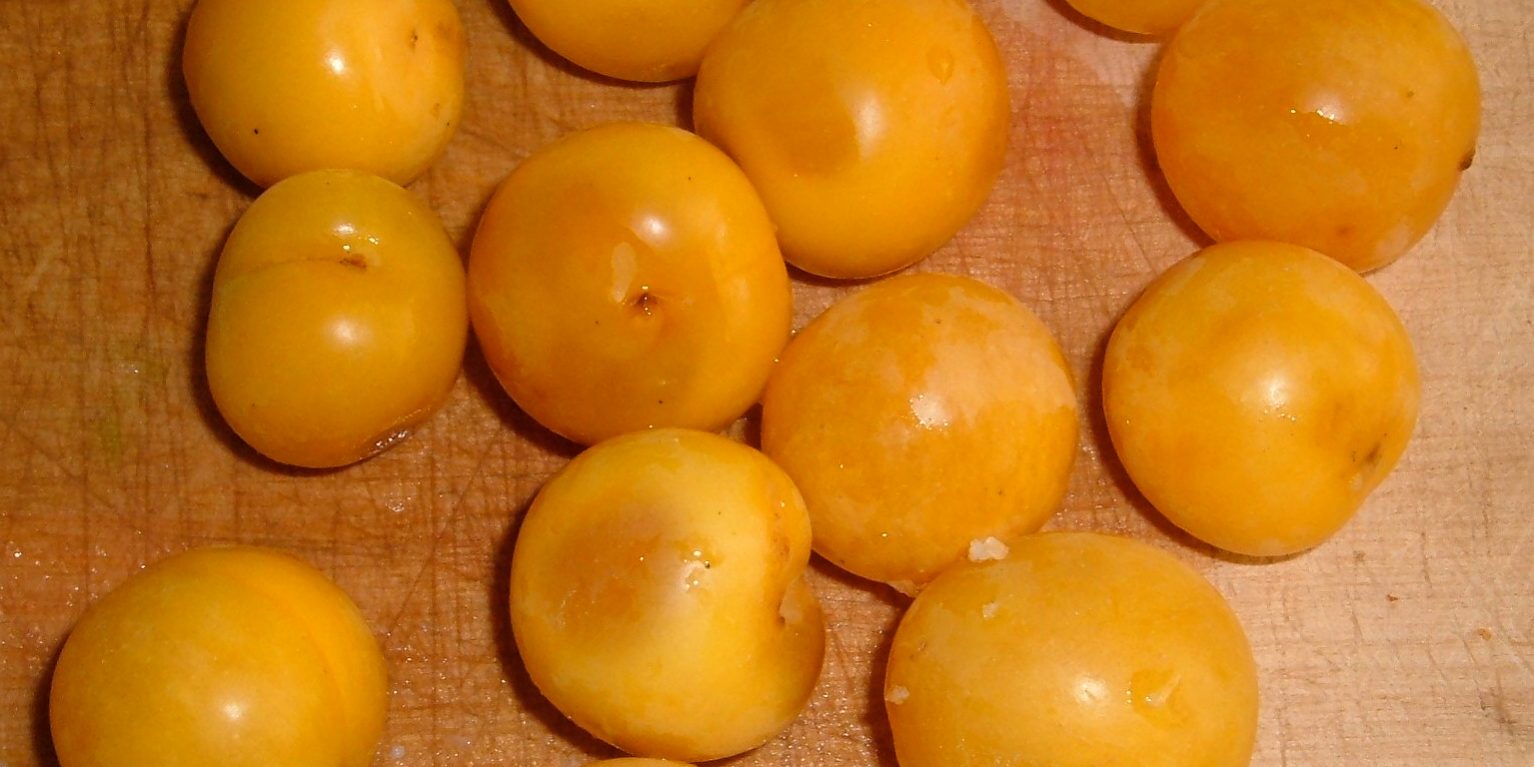 It is hard to believe that I have reached the 100 day milestone. Even more surprising is that the eating well on $1 a day has gone so well that I don’t feel any desire to immediately change the way that I have been eating (or that my cooking didn’t result in mt poisoning myself in some way). It has become a routine and the fact that it has tells me that it is possible to do this long term if I had the desire. After thinking long and hard about all the comments that readers have made, I have decided to stop the current challenge at 100 days and focus instead on buying as much food as possible for food banks with the $1 a day. There are a number of reasons for this decision:

I Think I Succeeded: I think that even my sister will now admit that I was able to make meals that others would eat (at least from time to time) while staying under the $1 a day goal. I don’t need to do this another year to make the point that it can be done.

Change Of Focus: While the last 100 days have been focused on me and how I was able to do this, I would like to see future posts focused more how anyone that reads this blog can save a lot of money over what they are currently spending on food while still getting exactly what they want and also being able to give excess to their local food banks. I already know that I can do it — I am now interested in showing anyone that wants to learn that they can also do it.

I’m Not A Foodie: No matter how much I would like to be one, I am not a foodie. I still do not enjoy cooking much. Even though it has been a great experience and I have learned a lot (I would like to sincerely thank everyone that took the time to pass along suggestions and recipes), and my cooking skills have slowly but surely improved, I don’t think that I have much more to offer in this area. I would still be perfectly satisfied eating the same thing over and over again, but that certainly doesn’t make for very interesting reading.

So from now on I will be using the $1 a day (and the excess that I have accumulated from the first 100 days) to buy food for local food banks. In addition I will be detailing exactly how I approach couponing and what I have learned about it over these last 3 months. I’m hoping that this will help answer many of the questions that people have had about how I was able to do this and encourage them to do the same.

I couldn’t begin the last day of this challenge with anything other than a morning smoothie. I gathered up the rest of the yellow cherry plums that I had: 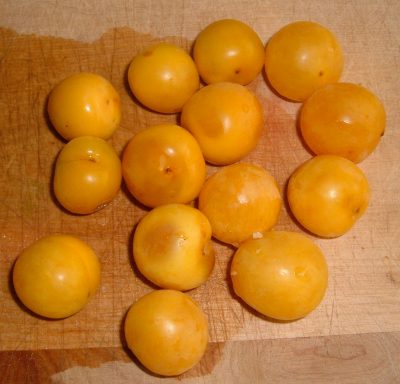 added a frozen banana and a few cubes of ice to make another delicious start to the morning. 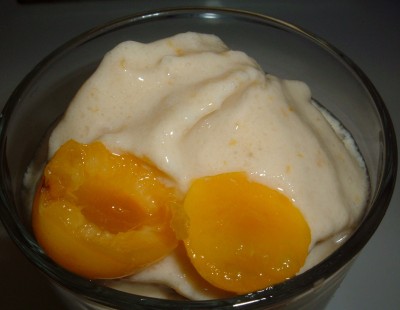 This is definitely one of the things that I will continue to do on a daily basis as it has really made the start of my days a lot easier and given me more energy and focus in the mornings.

The afternoon was busy as usual and I went with the usual afternoon sandwich.

I decided to use the last two halves of the green and red peppers I had to make stuffed roasted peppers. I took leftover brown long grain rice I had and mixed in salsa: 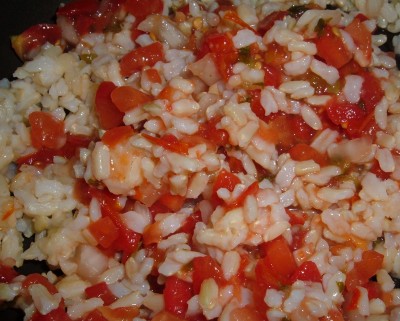 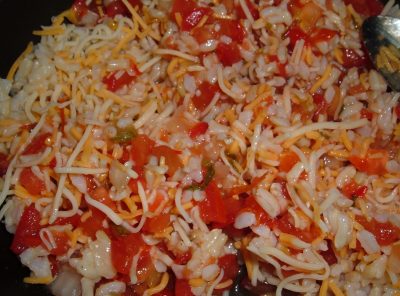 To prepare the peppers, I boiled them for 5 minutes and placed a light coating of vegetable oil on the outside. I then filled them with the rice, salsa and cheese mixture: 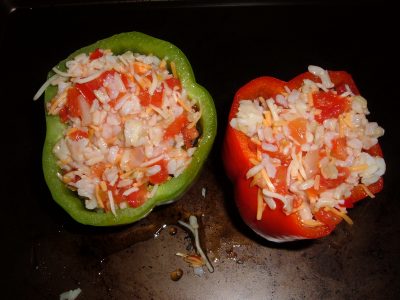 I placed them in the oven and roasted them for about 40 minutes: 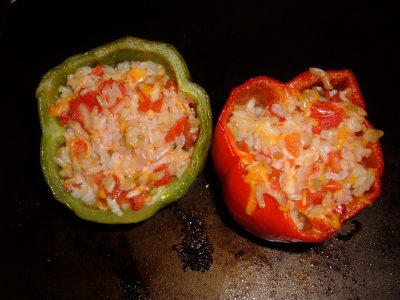 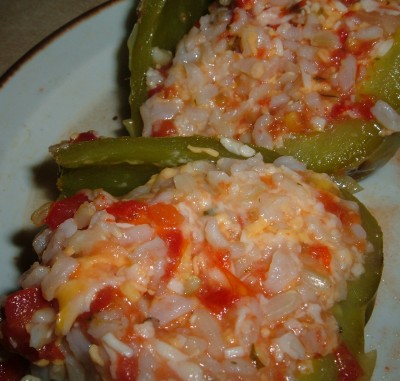 I was planning to save the red roasted pepper, but I couldn’t resist and had it as well: 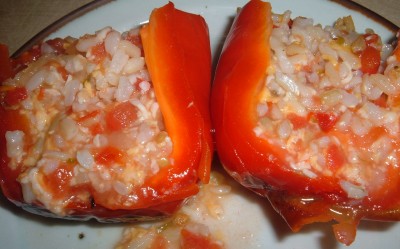 To celebrate, I thought that for a final treat, I would go out and buy myself a pint of Ben & Jerry’s ice cream since I failed to get it when I completed the first month, but when I thought about it a bit more, I knew the perfect way to end the 100 days. I took the rest of the frozen bananas and began to blend them, then added a large spoonful of peanut butter: 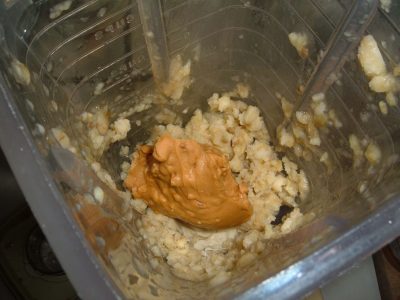 And when I finished I had the perfect dessert, this is what it looked like:

Of course, I had to give my sister a taste of it and of course, she thought it was awful — I’m starting to think that she may be the one who is palate challenged since I find it hard to believe that anyone finds the peanut butter and banana combination anything but delicious.

I thank all of you that have followed along for the last 100 days and hope that you enjoyed reading about the experience as I had going through it (Time Magazine recently did an interview with me) and hope that the next phase focusing on how I was able to do it will be helpful and worth reading as well.

The Beginning – links to all 100 days of the challenge ::: Introduction to Lazy Couponing