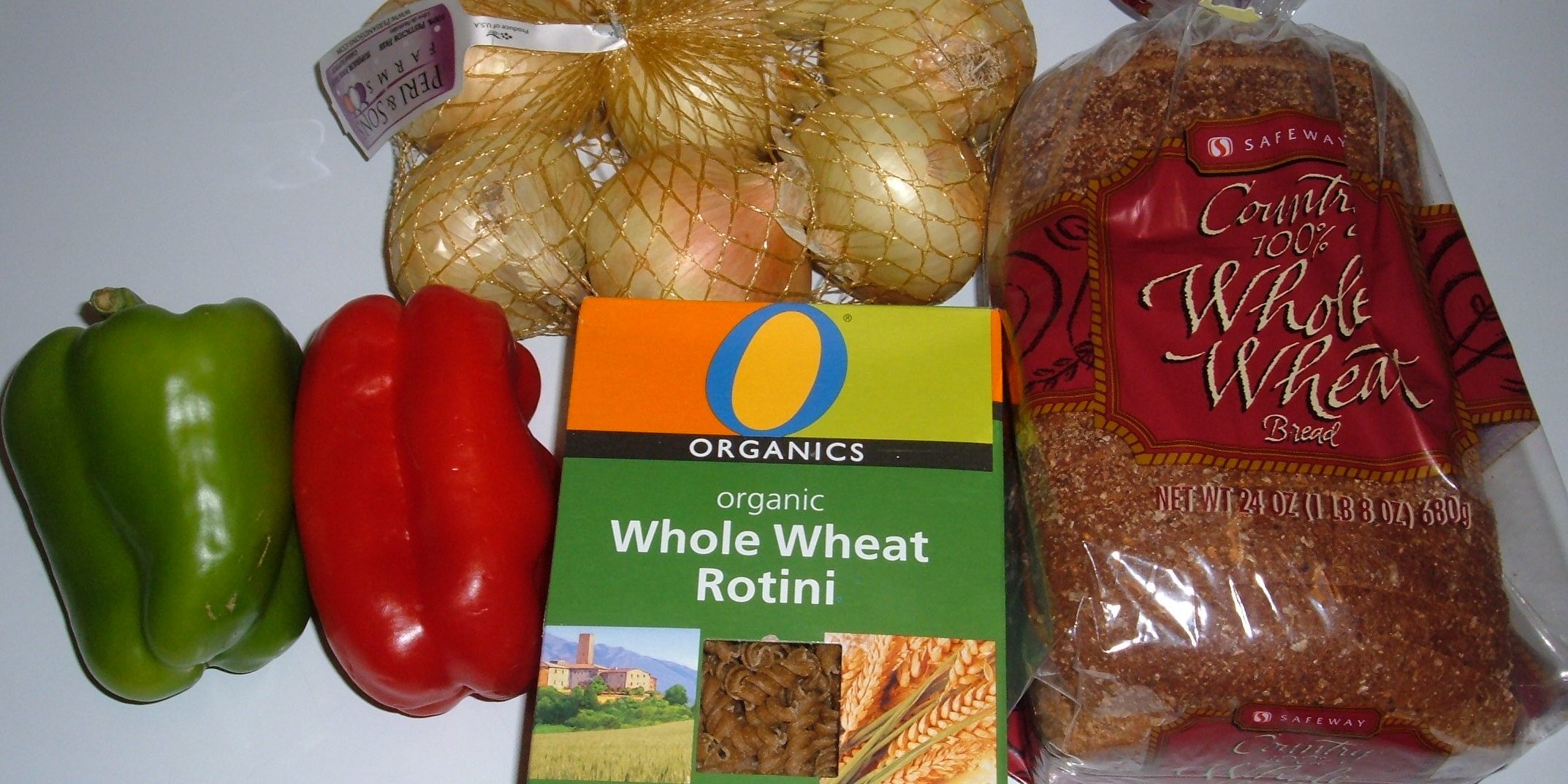 Hitting the last 10 day mark before reaching 100 days of eating well on $1 a day, I need to make some big decisions. I have enough food that I could easily last these last 10 days without buying anything and end the 100 day milestone at just over $0.50 a day, but that would make for some pretty repetitive meals and probably wouldn’t be much fun. On the other hand, I could go on a spending spree and have some pretty impressive meals these last 10 days using up the emergency fund I have accumulated, but that is definitely not how I would spend it if this were a long term need. Neither of these options appeals much to me, so possibly something in the middle – what do you think?

Another question that I need to decide is if I am going to continue this challenge beyond 100 days (which will greatly affect how I use the money that I have managed to save). Right now, it’s a toss-up. On one hand, I think I have accomplished the original goal showing that it is possible to eat well on $1 a day when using a bit of creativity and I have built up enough of a cushion to show that I could continue to do this long term if I wanted to. On the other hand, I would like to continue to encourage others to use the strategies to reduce their own food bills while creating opportunities to give to their local food banks. I would love to hear any suggestions you have and if you think I should continue, how you think I should proceed?

There really aren’t many deals this week at Safeway, but I needed to get some basics (I was out of whole wheat bread, onions and I forgot the pasta I had at the house where I was house sitting — another hazard of moving around a lot) so I decided to buy some stuff even though I didn’t have coupons for them: 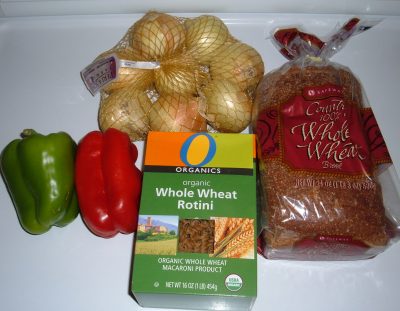 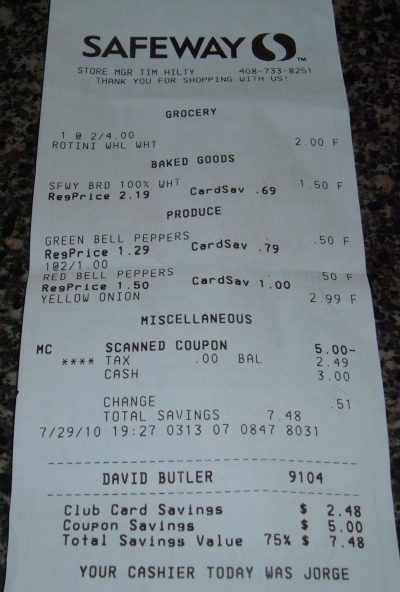 I decided to splurge a bit and get organic whole wheat pasta since several readers have complained that the pasta I was buying wasn’t healthy. I also picked up a red and green pepper because I had run out of them and they were fairly inexpensive ($0.50 each). The total for everything came to $7.49 (I did use a $5.00 off coupon that I had, but it wasn’t real savings for this challenge since I had to pay that amount out of pocket for some other things I had purchased for my sister — I knew I could use the coupon more readily than she could, so I simply kept it instead of having her paying me $5.00 and me giving her the coupon)

Although I rarely go to Lucky to buy food (it’s actually the closest store, but doesn’t have as many deals), I decided to stop by when I was in the area for other business since I wanted to check out a cereal promotion they were having to see if I could work it out to get the cereal that the Milpitas Food bank had requested I try and get. While there, I decided that I would splurge a bit more and purchased some spinach, beef and salsa: 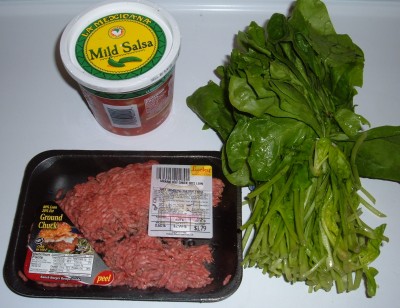 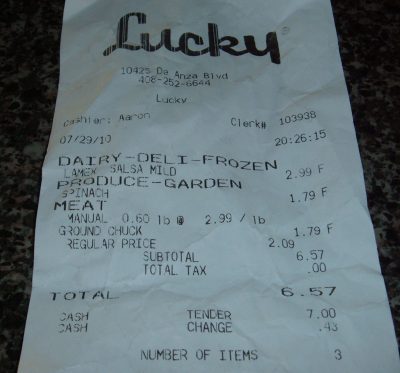 This cost me an additional $6.57. While I could have purchased many of these things for less if I had waited until a sale and coupons aligned, one of the advantages of doing this system is that you don’t always have to restrict yourself to the best deals. Swing on so many things opens up opportunities to buy some things you want as splurges (once you have built a base) and still stay well within your budget (even when it is only $1 a day).

Now that I am back, I finally got to go on my morning walk and see what had happened to all those blackberries while I was gone. I was concerned that they would have all ripened and the birds had cleaned them out, but the cooler than usual weather here worked to my advantage. I should have as many blackberries as I want for the next couple of weeks as the blackberries on the huge blackberry bush have just started to ripen. I picked a few, but since most still need a few days to ripen completely, I left most alone. 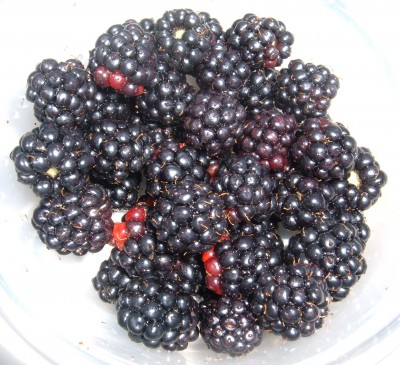 I decided to use the other half of the yogurt I had to see how it was in the morning, and as I expected, it wasn’t nearly as refreshing as the other smoothies I had been making. Again, this isn’t a bad thing (I can definitely see making these in the afternoon or evening), but definitely not what I am accustomed to in the morning. It is much more filling rather than refreshing: 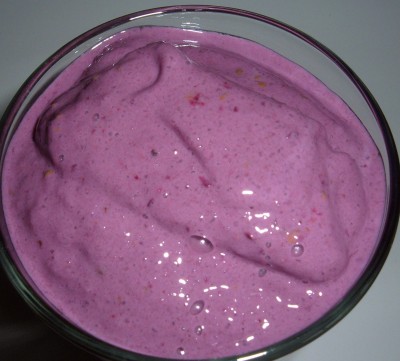 I went with the usual afternoon peanut butter on whole wheat bread and carrot sticks for lunch along with a bowl of Apple Cinnamon Cheerios (plain) as snacks later in the afternoon. Now that I have bread, the only concern is whether or not my peanut butter is going to hold out since it is quickly disappearing.

I’m finding that simple meals are my favorite these days (probably a combination of them not testing my lack of cooking skills and because I have been pressed for time so anything non complicated is a relief). I first threw in onions, red pepper, garlic and frozen spinach together: 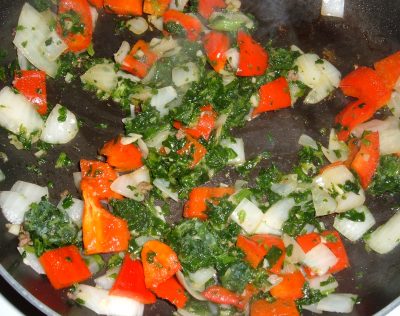 and then added some cooked hamburger that I had browned earlier (with salt and pepper for seasoning): 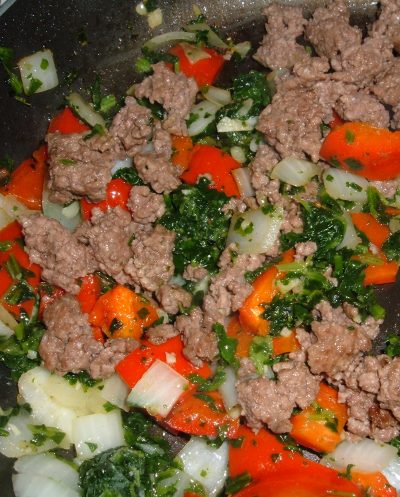 and placed this all over long grain brown rice I had cooked with some steamed broccoli (which I desperately needed to use since it was beginning to go bad) on the side: 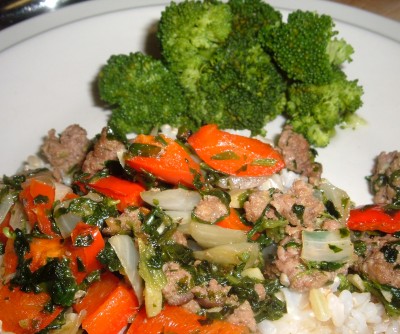 It was really good and I can see myself continuing to make myself meals like this even when this challenge ends. In the late evening I was craving a snack again so I finished off the rest of the cantaloupe: 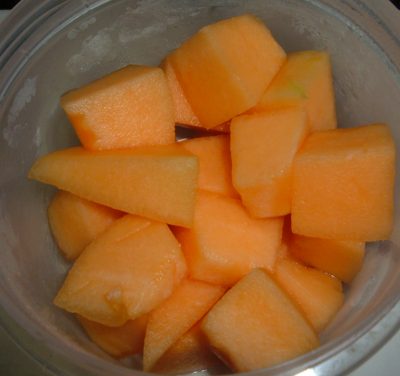 The Beginning ::: Day 91: I Still Think I Can Change The World