Creating Havoc At The Hospital – Day 89: Eating Well On $1 A Day 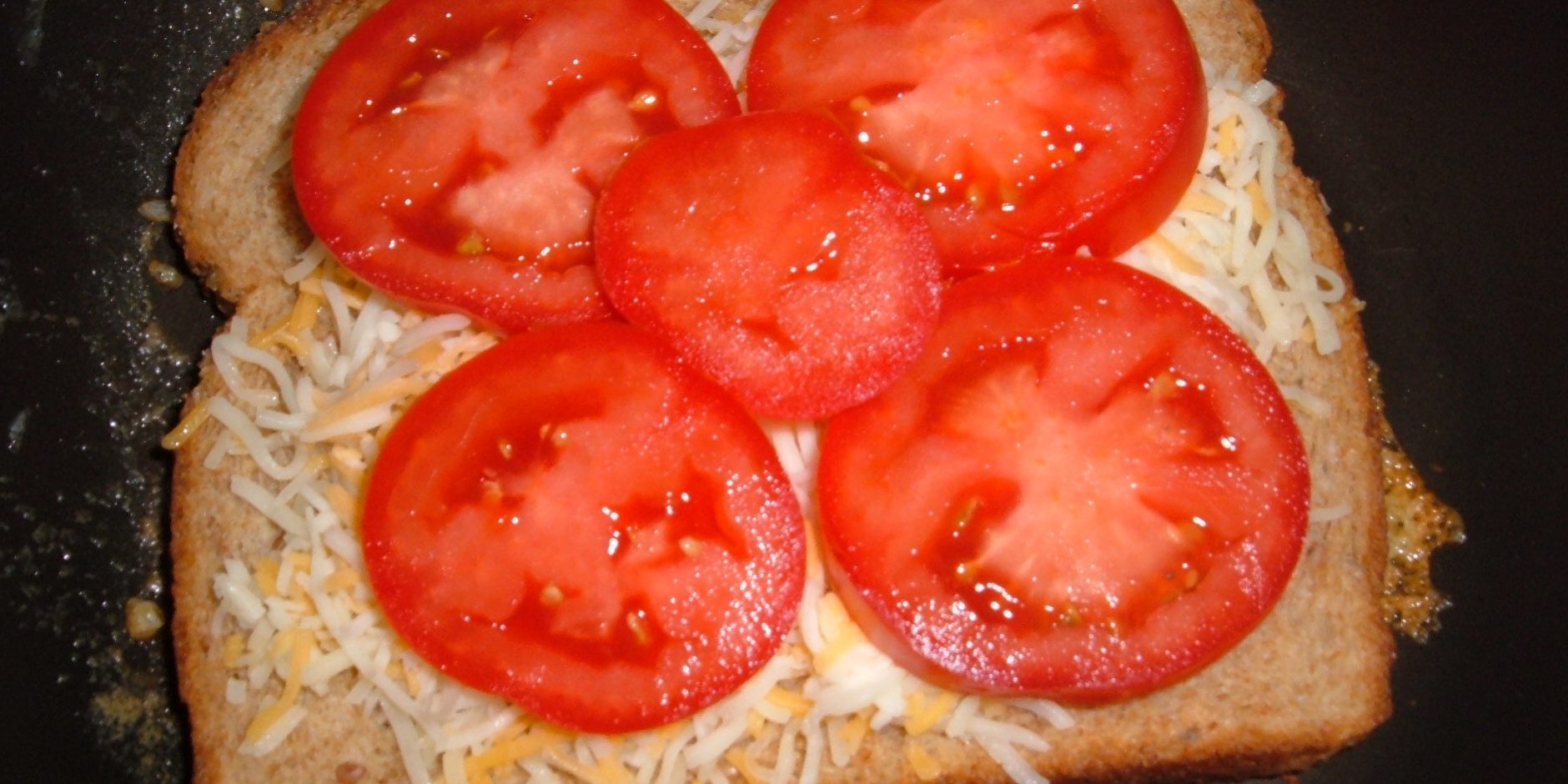 When I started this challenge, the first few days didn’t look all that promising when I ended up in the emergency room (It turned out to be caused by an intestinal abscess, not because of my cooking). While antibiotics took care of the abscess, the doctors wanted to figure out what may have caused it which meant that I got to experience the joy of a colonoscopy. Those results came back without being able to definitively determine what caused it, so the doctors wanted me to take another intestinal test which I had the pleasure of doing today.

I was told that I should not eat or drink anything from the night before and I had my appointment at 9:00 am. They were running behind schedule so I didn’t get in until 10:00 and then had to change into one of the x ray gowns. Once in the imaging room, I was told to drink two cups of a barium solution for my breakfast (not nearly as good as a morning smoothie). The nurse then explained to me that it would just depend how quickly the barium moved through my system as to how long the procedure would take. They would take x rays every 15 minutes as it passed through my system and then some extra images when it had completed the route. When I asked how long this would take, the nurse said anywhere from a couple of hours to as long as 8 hours.

At this point, realising I could end up spending the entire day there when I thought I was going to take an hour or two at most, I immediately asked if there was anything I could do to speed up the process. She said that standing and walking would be better than sitting, but it just depended on my system.

The nurse took an x ray and asked me to wait outside the x ray room where there were a couple of chairs (this was inside the hospital away from the waiting room so there were only patients being taken to different rooms for procedures around) until it was time to take the next x ray. Me, being the patient person that I am, decided that I wanted to get out of there as quickly as possible.

As I stood and walked in circles in an attempt to get the fluid flowing through my system as quickly as possible, I somehow got it into my head that jumping up and down might help the process. Now, this probably wouldn’t have looked so bad if I had been alone or if everyone understood why I was doing this, but the random patients that were being brought in to have images done in between the 15 minute intervals when I was having mine taken had no idea why there was a tall (I’m 6 foot 3 inches) man in a hospital gown jumping up and down for no apparent reason outside the imaging room smiling at them like this was absolutely nothing strange or out of the ordinary.

Apparently my behavior was causing enough concern that patients were asking what was going on to the nurse inside because she asked me what I was doing. When I explained she laughed and said that jumping might help a little, but probably wouldn’t help much since the intestines twist and curve in all different directions.

Looking back, this was probably her nice attempt to discourage me from causing so much alarm outside her room, but instead it lead me to the conclusion that I needed more movement in various direction to help the process. The obvious choice in my mind was to play a pretend basketball game outside the door. Now the patients were getting a smile from a man in a hospital gown pretending to dribble, take shots and get rebounds as if absolutely nothing strange or out of the ordinary was taking place. I’m surprised someone didn’t call the men with the straight jackets to let them know that one of their patients had escaped.

Let’s just say that I think that the nurse, while amused by my antics (she was laughing every time she called me in) was relieved that the barium went through my system rather quickly and I was finished by noon so she didn’t have to calm down concerned patients that passed me on their way to get their images done…

By the time I made it back home, I had about half an hour before the local food bank closed and I needed to take a trip to deliver the Kraft cheese, the Ritz Bits and a bunch of other things I had accumulated: 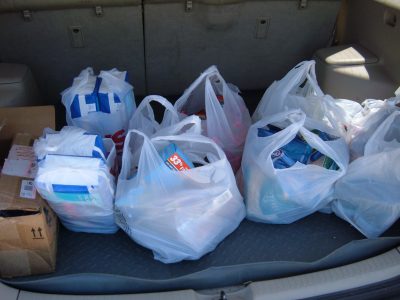 Luckily I made it on time and Karen (the person that runs the food bank) asked me if I thought there would be any more cereal deals coming as they were running desperately low and that is always an item that people want, so I will focus on trying to find these deals.

By the time I got back from the food bank, I was quite hungry and I decided to make myself a quick toasted cheese and tomato sandwich which ended up being delicious (but then again, at that point anything would probably have been) 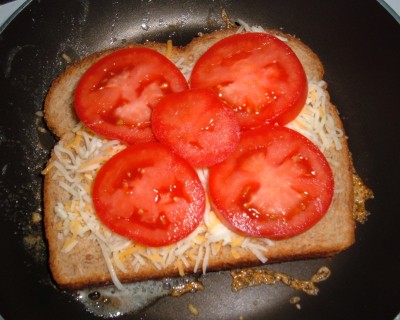 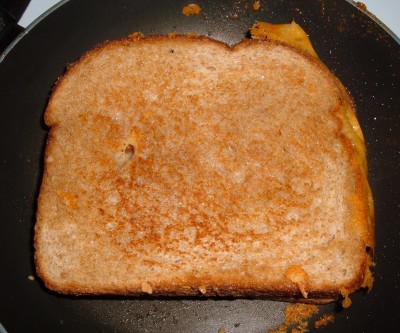 Throughout the day I was drinking mass quantities of water to try and get all the barium through my system. While I didn’t ever feel sick, I also didn’t feel well and wasn’t sure how more solid food would make me feel, so I opted for a smoothie (since I had missed it two mornings in a row).

I decided that I needed to make it a bit more substantial than usual so I decided to use the yogurt that I had (I had been saving it to make my own yogurt as a number of people had suggested, but lack of room in the refrigerator makes that an impossibility for the near future) 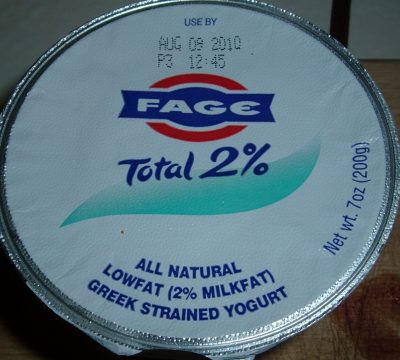 I then cut up three ripe plums: 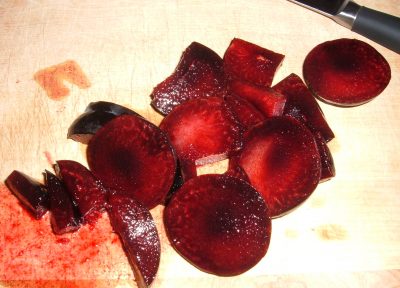 and added them into the blender with a frozen banana: 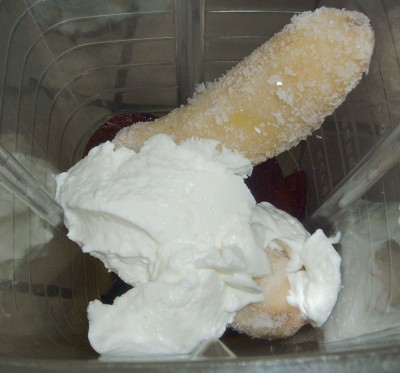 The yogurt definitely thickened up the smoothie and did make it more filling, but it also dramatically changed the taste of it. This wasn’t a bad thing (it still tasted very good), but I’m not sure that I would like that taste in the morning. It made it feel more like a meal than something refreshing (the yogurt seemed to keep the smoothie from getting quite as cold as my usual smoothies). I’ll have to give it a try and see… 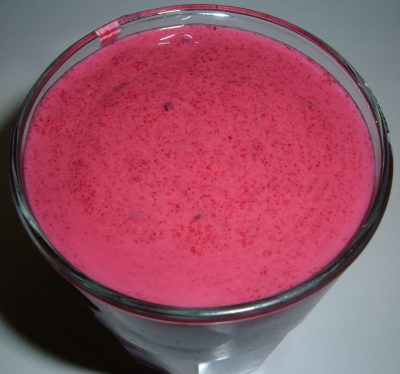