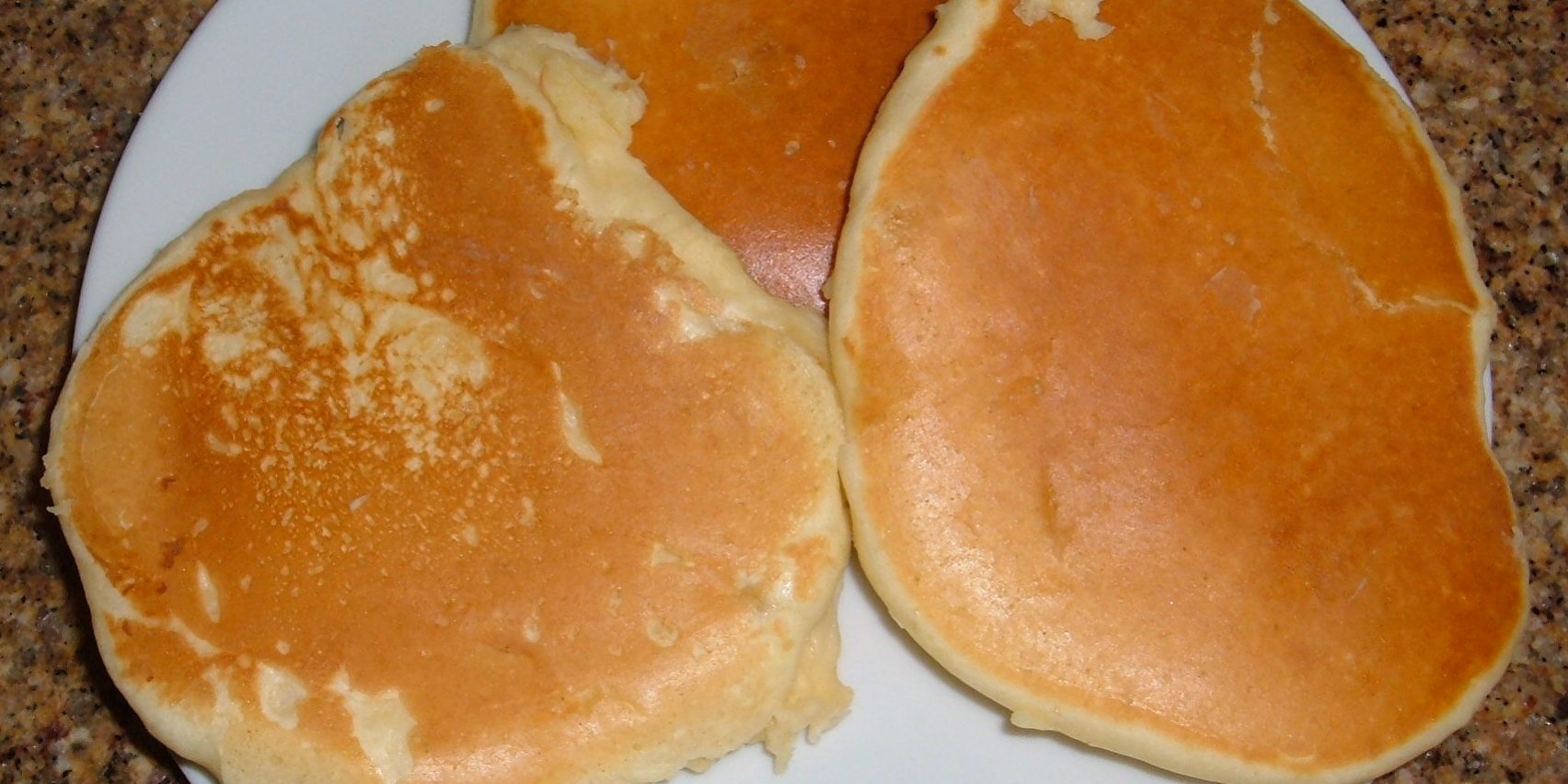 While you probably already know that I don't especially like cooking and before this challenge began, I did the bare minimum of cooking, you probably don't realise how bare minimum that was. Today you will find that out. While never having broiled anything should have given you some indication of my total lack of cooking skills, the fact that I made pancakes for the first time in my life today should cement the image of just how pathetic I am when it comes to the kitchen.

The fact that I successfully made them has me torn inside. Should I be happy and proud that I didn't screw the pancakes up or should I be sad that it has taken over 40 years for me to actually make one…?

The one thing that I currently lack is fruit and veggies. Part of the issue is that I am trying to avoid buying them because I know I have some coupons that will help me reduce the costs of these if I can hold out a few more days, but I did need to add at least a little bit so I made a late afternoon grocery store run and purchased a head of lettuce and some tomatoes which set me back $1.76: 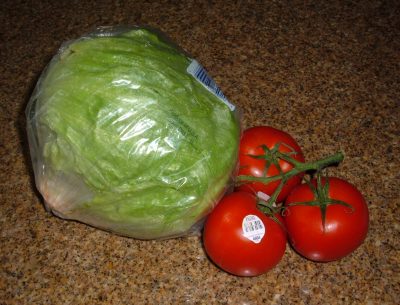 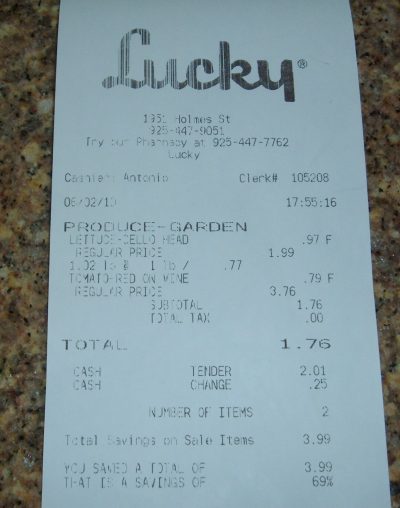 Now that I have my stock of instant oatmeal replenished, I can go back to my 4 meal a day schedule (and I am going to try and add a fifth small meal in there as well). The two meals in the morning really does make for a better overall day for me. I added a box of raisins to the instant oatmeal to give it some flavor and it worked great.

As mentioned before, I also made pancakes for the first time. I added a full banana to give them some flavor since I didn't have any topping (oh, what I would give for some powdered sugar or honey or even jam…) 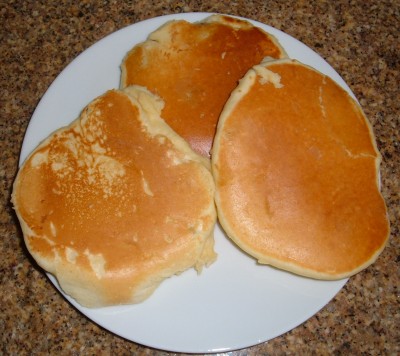 This strategy was perfect as long as there was a banana in each bite. Unfortunately, there were several that missed this essential ingredient and made for a pretty dry mouthful of pancake. Any suggestions of ways to avoid this for future pancake escapades?

It was another busy day and I didn't have much time for lunch, so I decided to try one of the free Deli Creations I had found. While I'm not sure how healthy of a meal it was, it did taste a lot better than the previous one I had found: 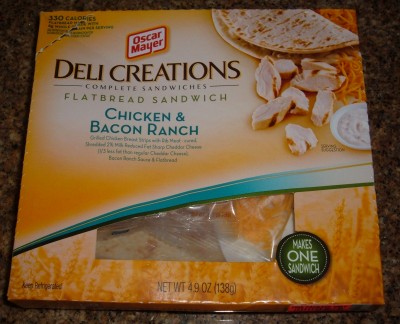 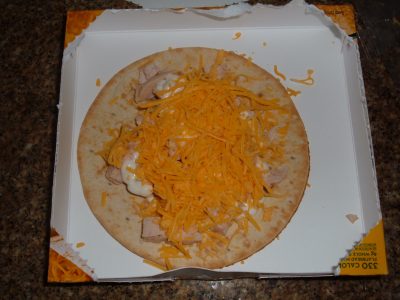 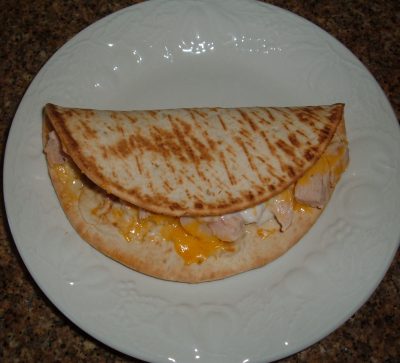 I did have an late afternoon snack of a peanut butter sandwich and my last Power Bar and I think that this would be another good “meal” to implement on a daily basis if I have the time.

I decided to try some baked potatoes for dinner (I ended up cooking them a bit to long). The only issue was that when I went to get the sour cream to put on top, I realized I had forgotten to bring it (another hazard of traveling while doing this challenge), so it was time for some improvisation. I ended up grabbing another one of the Deli Creation meals and adding the chicken and a bit of cheese onto the potatoes, but because I had overcooked them and the insides were a bit dry, I also needed to add the bacon sauce that came with it to take away some of the dryness. I also added a salad with lettuce and half a tomato: 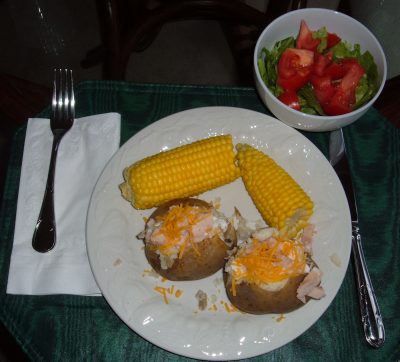 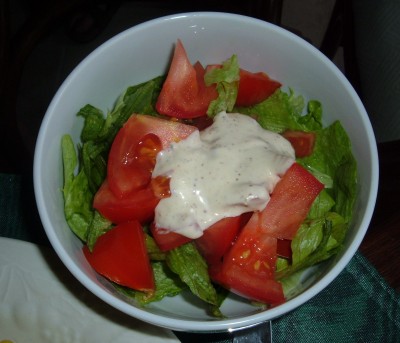 In the end, it didn't taste too bad at all considering the last minute changes that needed to be made. Since I have so many potatoes, I will probably have a lot more practice baking them in the days to come.