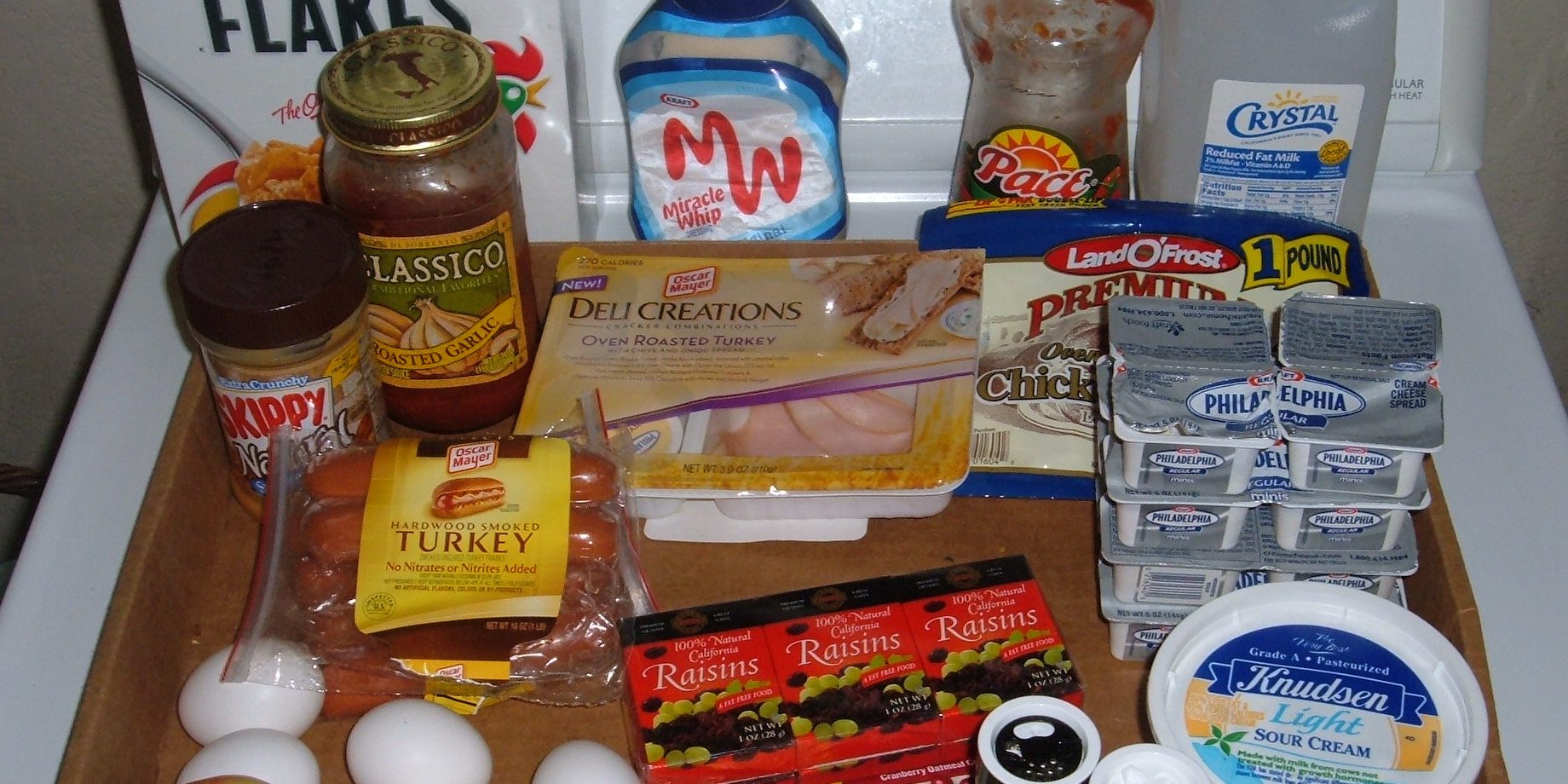 Today was a disaster and I spent most of it wondering why I ever thought it would be a good idea to continue this challenge. This challenge really doesn’t lend itself to someone that does a lot of traveling and I was off to a new place for the week. Having to move the food that I do have and then trying to locate stores in the new area is never fun, but what really killed me this time was not having access to all my coupons. This proved to be costly today as I missed out on some good deals because I didn’t bring certain coupons that I could have used.

As for hoping to create more nutritious meals, this was probably one of the worst days I have had the entire challenge period when it comes to meals and it has me a bit scared at what I have gotten myself into.

This is what I had left at the end of the month: 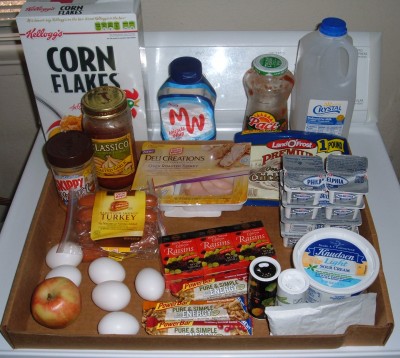 It was time to do a bit of shopping. This was what I added to the above: 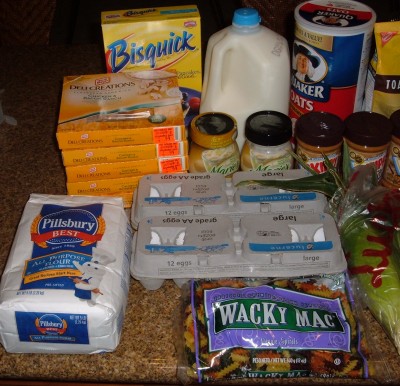 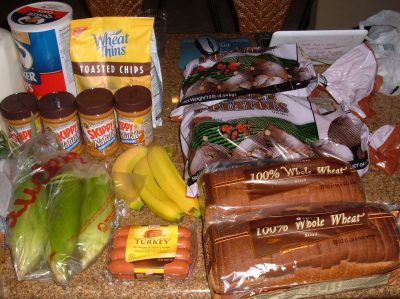 I took advantage of the new rules for this month and the total came to $3.22 for all of the above. 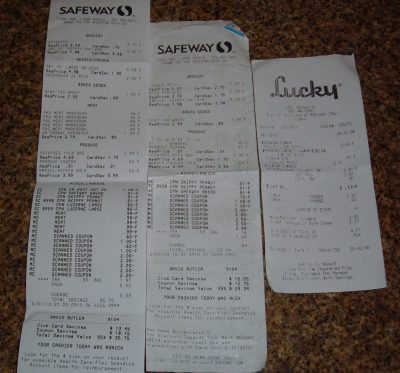 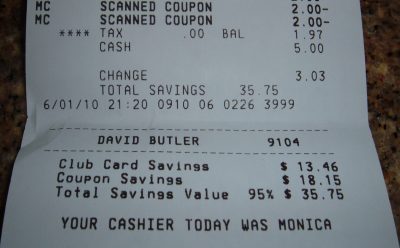 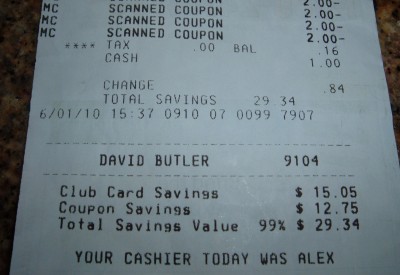 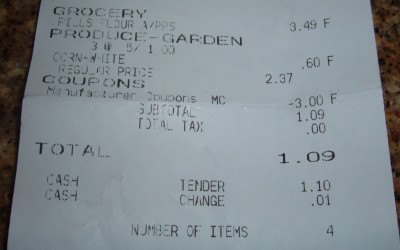 Here are some of the coupons I used to get these deals:

** Safeway had an store coupon for Skippy peanut butter for $1.49 on last Sunday’s paper insert (good through 6/5). I stacked that two $0.75 off 2 online coupons (no longer available, but there may still be a $0.60 off 2 coupon available)

** 100% whole wheat bread was available for $0.99 with a Safeway coupon from the Sunday advertising circular (good through 6/5).

** I used a $0.60 off 1 online coupon for Bisquick that should still be available.

** Last week’s Wednesday advertising circular for Safeway circular had a store coupon for 1 dozen eggs for $0.99.

** Deli Creations were discounted at this new store much like I found last week, but a different kind that looks a little better. I used five $1 off 1 coupons for Deli Creations in the 5/16 SmartSource weekly newspaper coupon insert which made them free.

** I found a $1 off 1 peelie coupon in the hot dog section and used it as I have done before on a package of hardwood smoked turkey franks.

** I used a bunch of $2 off your next order Catalina coupons (mostly from Scrubbing Bubbles that I had earned last month with money maker deals, but I couldn’t use last month because of the more restrictive rules.

Since it was a travel day to a new place for the week, it threw havoc into my eating. I did get up and have a bowl of Corn Flakes with the last of the banana I had (at that point): 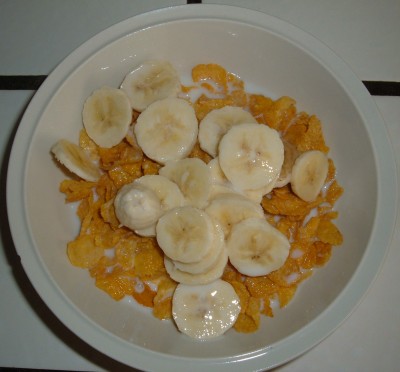 I should have planned ahead and made something for myself for lunch in the morning, but didn’t and the day was crazy. Along with the going to a new place, I made a delivery to the food bank of all the food I had accumulated and then ended up meeting an old man that wasn’t feeling well that I ended up driving to the hospital. I also had to do all the shopping for the above food.

The problem with eating on a limited budget, when the unexpected happens (taking the old man to the hospital took about 3 hours out of my day) is that you can’t just stop into a fast food joint and grab a bite. I ended up eating 2 of my power bars and my last apple with the last of the peanut butter throughout the afternoon which just barely kept me going.

I didn’t get back until fairly late. I decided to try and make some potato salad with the potatoes I had purchased (I cooked the potatoes too long and they came out a bit mushy) and put a couple of the turkey franks onto the BBQ (it was already going) and used a slice of whole wheat bread as a bun. It wasn’t pretty at all and not something I would usually eat, but I was hungry enough at that point that anything would have tasted good. 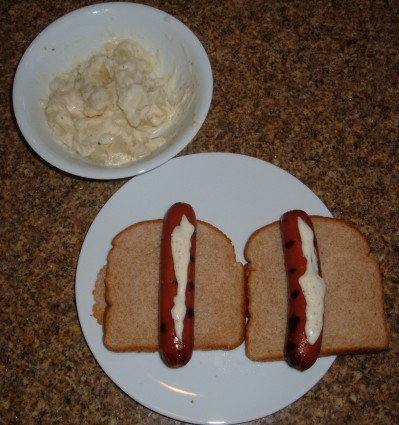