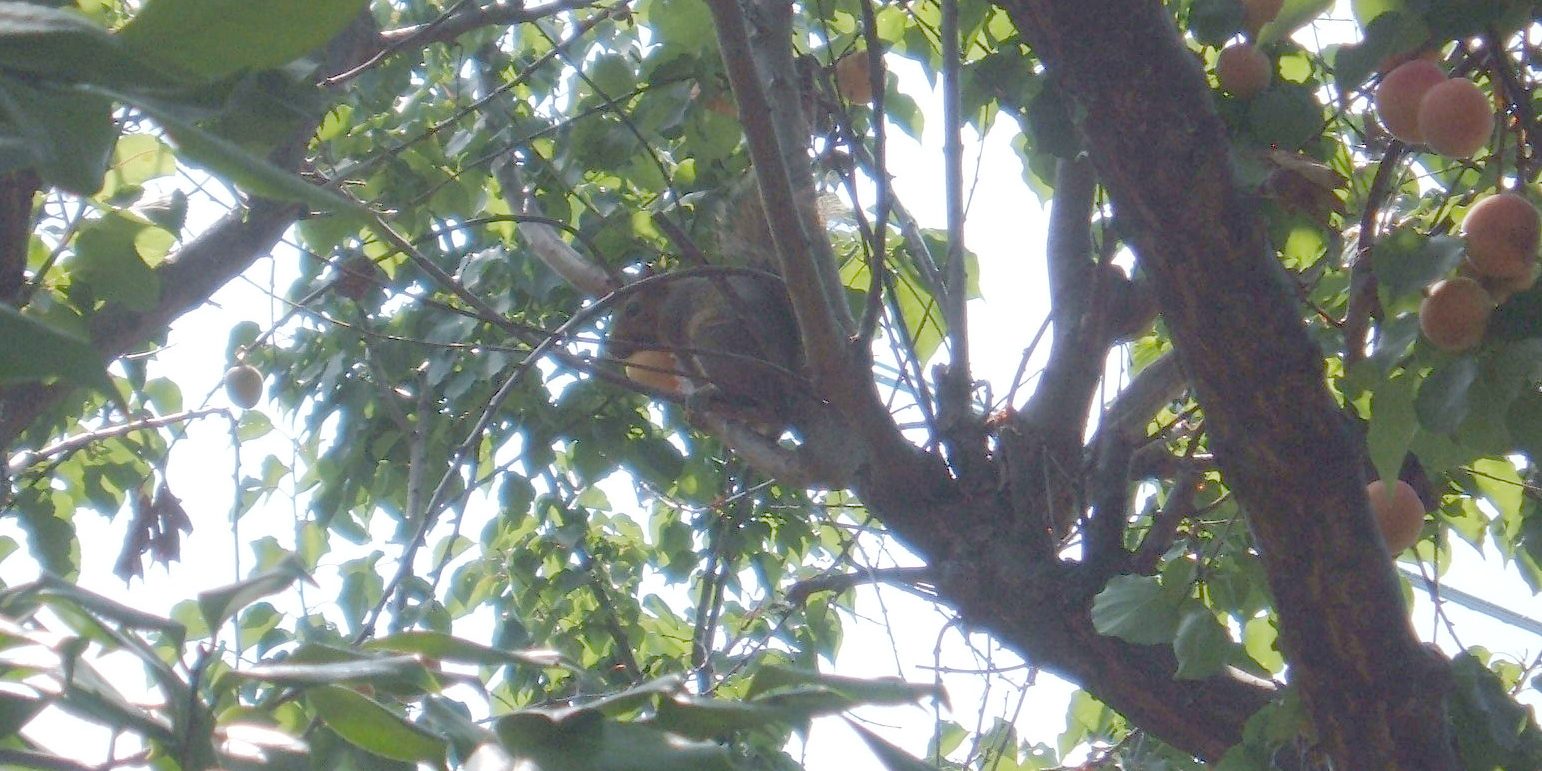 The house next door to where I am house sitting has a large apricot tree in the back yard. As I was looking up into the tree at all of the lovely fruit, a squirrel casually sauntered by on the fence, hopped into the tree, grabbed one of the apricots and started eating away: 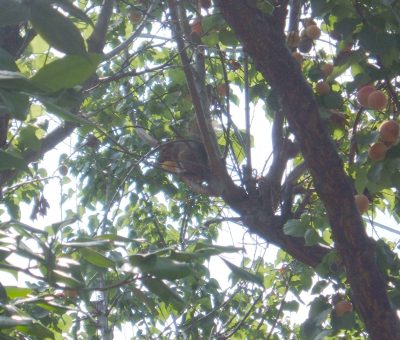 What happened next convinced me that squirrels seriously have it out for me. After eating about half the apricot, the squirrel looked at me and spit it out so that the apricot landed on my side of the fence. He then casually grabbed another apricot and began eating again: 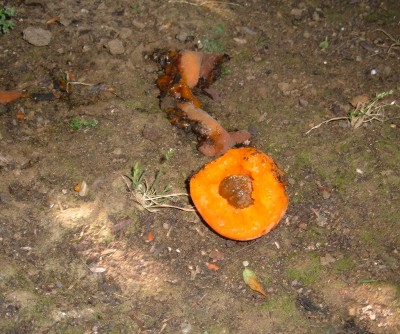 This continued for about 20 minutes with the squirrel spitting out mostly half eaten apricots in my direction. Even worse, if the squirrel picked an apricot that he didn't feel was worthy of his discriminating taste for whatever reason, he would just spit it out without eating any of it where it would land at my feet. It didn't take a genius to see that I was being mocked by a squirrel (seriously, you can't make this stuff up).

I have found out a lot about myself during this challenge, some of it not pretty. I thought I had hit rock bottom when I almost came to tears after I had lost my best coupons. Unfortunately, it now appears that things can get worse. Surrounded by half eaten apricots (along with a few full apricots that the squirrel had rejected), I realised that I would be willing to do what would have been unthinkable before I started this challenge. That's right — in a matter of a couple of days I'd not only lost all my coupons, I'd found myself willing to eat squirrel leftovers. 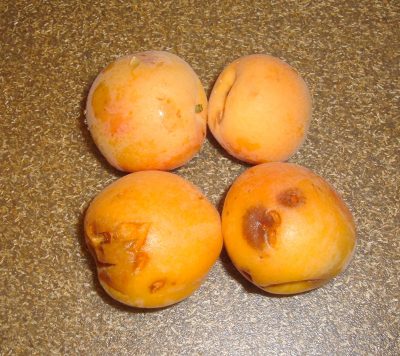 Having made the decision that will likely keep me friendless for life, I was going to make sure that I at least enjoyed eating the squirrel leftovers and immediately put them to use for an apricot oatmeal. The apricots were delicious, but even this came with a sad realization — that squirrels have higher culinary standards than myself. 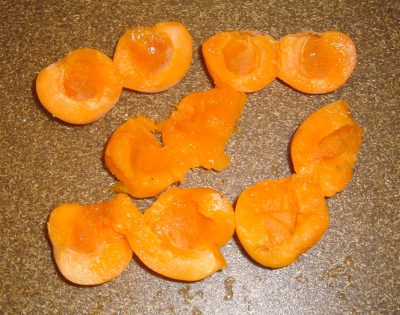 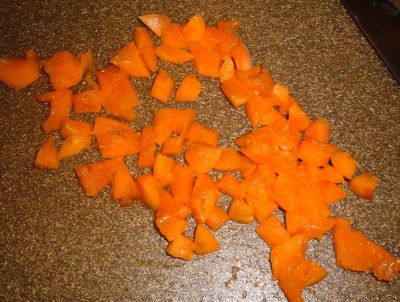 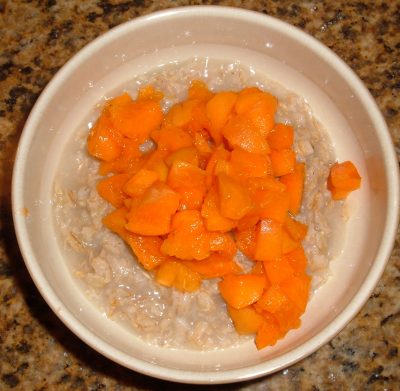 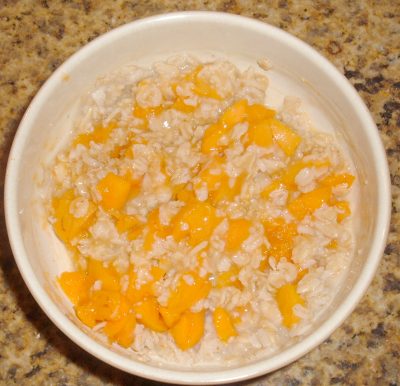 I decided that if peanut butter banana sandwiches were tasty, then a peanut butter raisin sandwich should be pretty good as well (although I am sure my sister would probably reject it as not being a proper meal as well). As it turns out, I was right – they are pretty damn good. Throw in some toasted Wheat Thin chips and a glass of blueberry pomegranate juice (half juice, half water) and you have a good tasting quick meal: 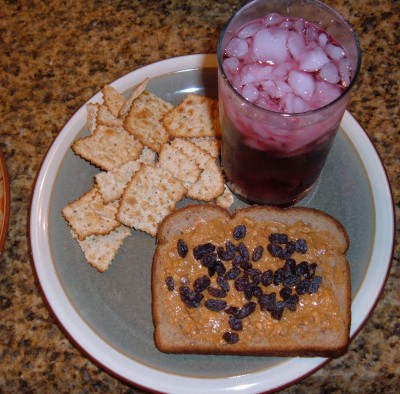 I wanted to take advantage of the chicken I had purchased, so I decided to make chicken strips over a veggie rice. I fried the chicken adding salt, pepper, a little garlic salt and onion bits: 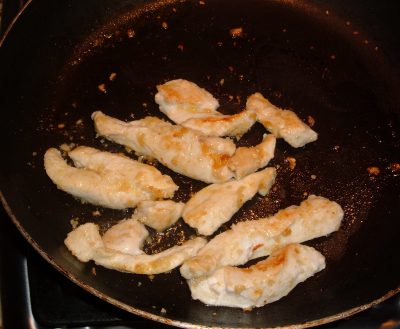 I then put this over rice I had cooked with half a cup of frozen veggies: 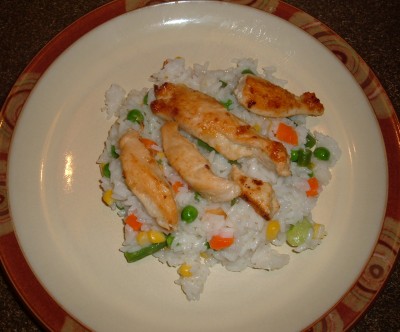