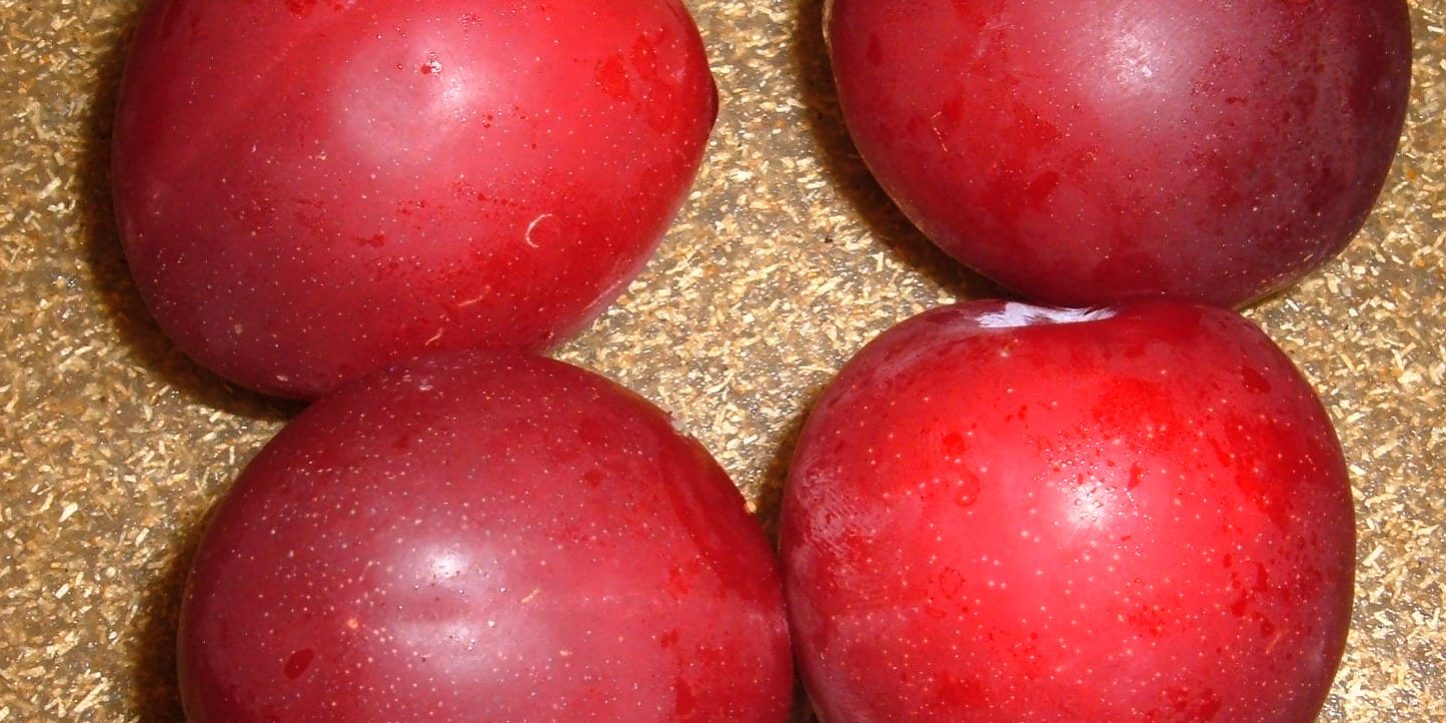 I wish that cooking could always be this much fun as I had today (see below to the plastic bag omelet). It was a good reprieve from looking at cooking as a chore and I think it has helped me defeat the cooking rebellion (at least for the time being). 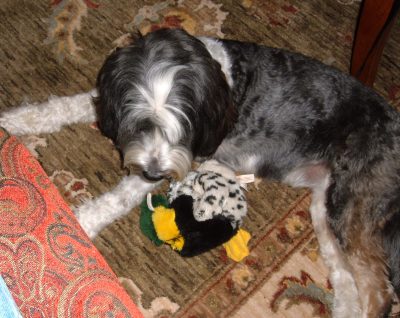 and found some plum trees along a back fence at a school where we walk. I took 4 that looked ripe: 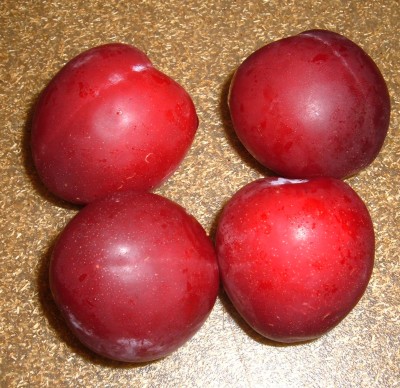 I used two of the plums I had gathered on the morning walk to make a plum smoothie that turned out wonderful (2 plums, frozen banana, small amount of blueberry pomegranate juice, ice) with them being much lass sour than the previous plums I picked. I will have to get some more if possible: 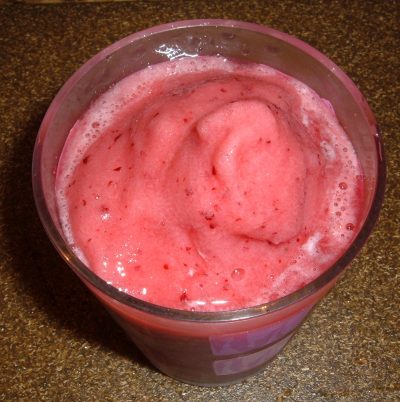 I'm starting to try and cook more than I need the night before so I have extras to eat (and so I don't have to worry about cooking so much). The chicken veggie rice (from last night's supper) made for a wonderful mid-afternoon meal: 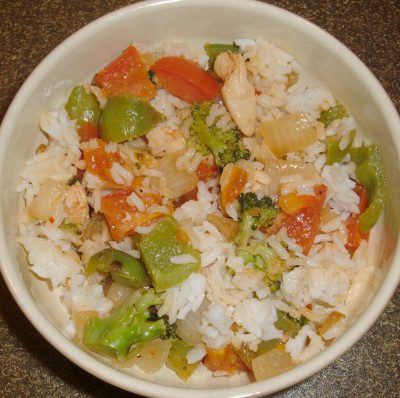 The last of the 20 lbs of potatoes I purchased were on there very last legs. In fact, a few of them had gone bad and had to be thrown out. I decided I needed to cook the rest of them up so that no more of them went to waste. I decided to go ahead and roast them as I had done a couple of times before. With the potatoes, I added half an onion (all I had left), half a green bell pepper and a bunch of baby carrots, smothered them in Italian dressing with salt and pepper added as well: 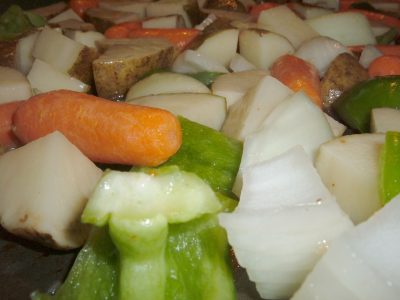 I'm getting better at letting them cook — I let them brown a bit more this time although I probably could have let them go even a little longer (I have this fear that I am going to burn them like the beans and lose all the food). 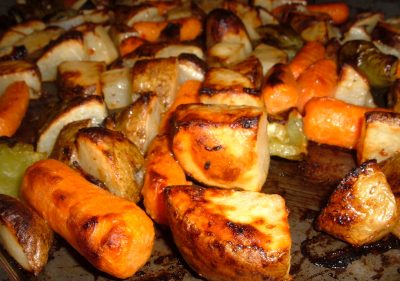 As soon as I saw this comment by Julie on my post about how I can't flip an omelet, I knew that I was going to have to give it a try:

Boil a pot of water. Put two eggs in a Ziploc freezer bag (not the kind with a zipper on top, but the kind that you have to put the two sides together and press them to seal the bag). Squish the eggs until they look sort of mixed. Add whatever other ingredients you want — cheese, spinach, ham, chopped bacon, whatever. Seal the bag almost all the way and get as much air out of it as you can, then seal it all the way. Carefully place the bag in the boiling water and boil for exactly 13 minutes. No more, no less. Open the top of the bag and the omelet will roll out onto your plate perfectly cooked and more or less omelet shaped. (I picked this up on the Internets several years ago and use it several times a month.)

Now this is my type of cooking! I must admit that when I first saw the comment, I was a little apprehensive. I wasn't sure if Julie was trying to play a joke on me due to knowing I have no cooking knowledge and she wanted to see an even more spectacular omelet disaster (warning signs always go up when someone ends the explanation with “I picked this up on the Internets…”), but it also called to me in a way no regular recipe ever could. I had to see if it really worked.

I took out a plastic bag as described and fixed it up so that it would be easy to put the ingredients inside: 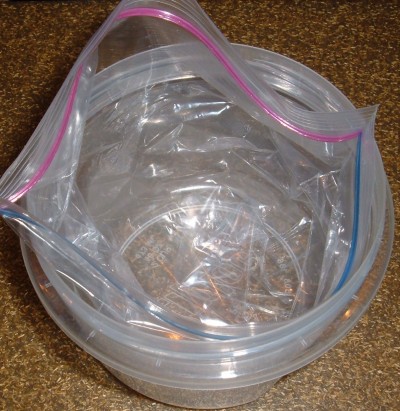 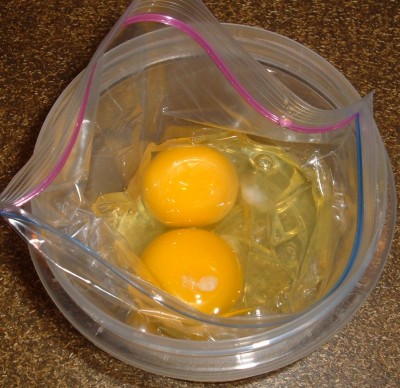 Once they were in, it was time to mash them up with my hands (yes, the kid in me was definitely coming out). Once smashed, I added some, salt, pepper, cheese, tomatoes and a bit of celery:

The it was time to get as much air out of the bag as possible: 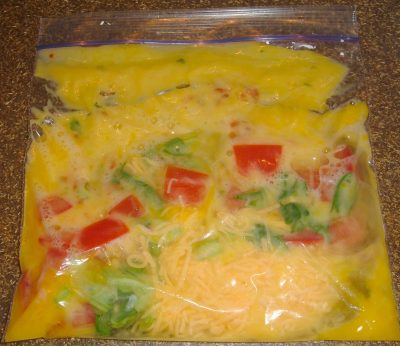 With the omelet now ready to be cooked, I placed it into the boiling water: 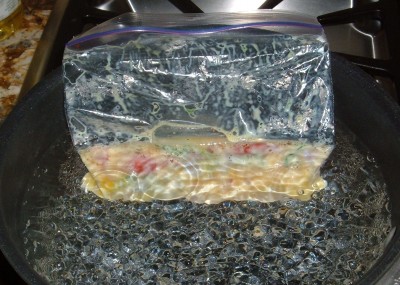 And waited for 13 minutes as it cooked: 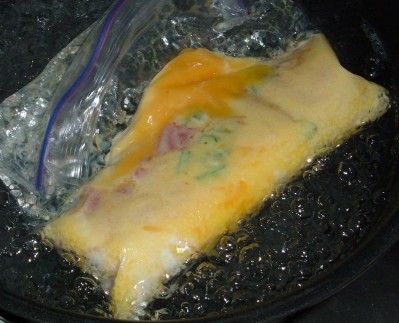 Much to my surprise (and thorough enjoyment), it came out pretty damn well (and tasted great). I then added a side of the roasted veggies I had made: 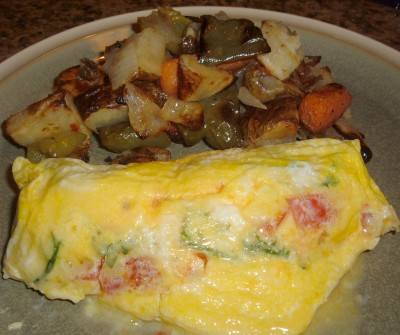 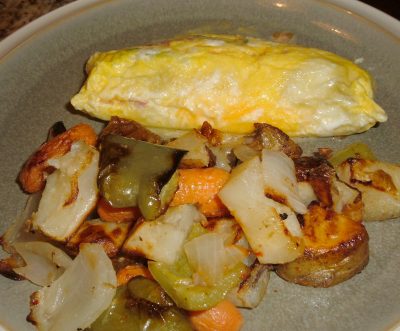 Unfortunately, as fun as this was and as much as it appeals to my idea of how cooking should be done, I won't be making this in the future. A quick search found that there are a lot of warnings not to make plastic bag omelets because these bags are not approved to boil food. The issue is that the bags are made from polyethylene plastic which has a softening point of approximately 195 degrees Fahrenheit and water begins to boil at 212 degrees. This provides a chance that the plastic could begin to melt and contaminate the omelet with the known carcinogens present in the plastic bags. Bummer…why do the things that are always the most fun have to be bad for you? (A big “Thank You” to Julie for letting me play in the kitchen instead of cook and still come out with a meal in the end)

The Beginning ::: It's Hard Giving Money Back To A Store – CVS Step By Step MoneyMaker